Day 2
We woke up by around 7 in the morning. Breakfast was a bit unappetizing. There’s only so much of roti or bread that you can wash down at an altitude. Anyone making an extended trip up here (or anywhere at some altitude) is best advised to let the guide know their food preferences in advance. Our guide, Mannu, had told me the food itinerary over the phone a few weeks back, but I was so caught up with the trip fever then, and was like whatever, Mannu, whatever. Anyway, Satopanth Tal was still kilometers away, and we would either camp at old base camp of Mt. Neelkanth or the new base camp further up, if we can make it. From there, Satopanth can be reached on Day 4.

The two of us set off after breakfast. Mannu and others promised to catch us somewhere up there soon after packing up the belongings. Rough directions exist on these treks because of cairns (small heaps of rocks) made by people who have been there before us. You stop at one of these cairns and look around and pretty much you can spot the next one at a distance. 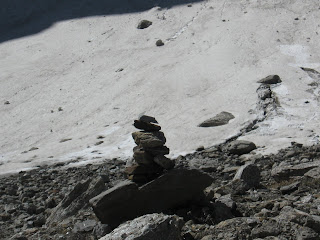 The initial part of the way just boulder hopping as demonstrated below. Your legs start to ache like crazy, after thirty minutes or so. But we kept moving on, with 2-5 minute breaks after 10 minutes of walk. 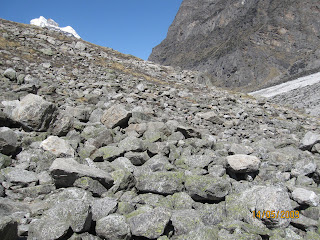 Our support crew caught up with us just before Vang Lung glacier, seen below. This glacier burst some time in 2007 or 2008 and brought much misery with rocks and dirt flowing all the way down to Mana village. It even destroyed the bridge across the river at Mana. Mannu gestured with his hands “itne mote mote pathar the”, his hands indicating that the rocks were far far bigger than the hand motion that he was making. 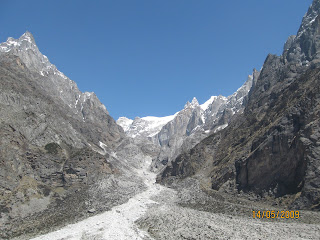 Immediately after the glacier is Lakshmi Van (this is where apparently Draupadi fell to her doom, on the way to heaven). A mini collection of trees. I wish we had the energy to walk the previous day and camp here overlooking Lakshmi Van. 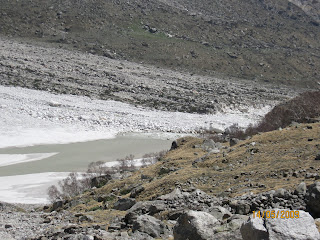 It's one of those places that you go with high expectations, and you end up feeling that your high expectations are in no way a match to the splendor that unfolds in front. Himalayas, by their sheer scale, can do that to you. 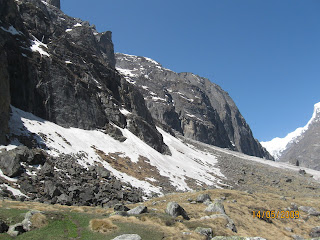 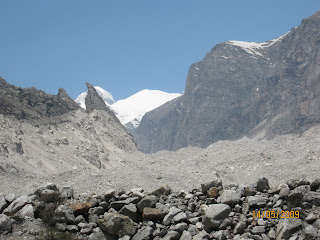 Somewhere after Lakshmi Van, the situation became punishing. No wonder Draupadi decided to fall before this – women keep a nostril open for trouble ahead. Ice, my love, ice - had plans for us. Sometimes packed, sometimes shaky, sometimes cracked, most of the times dirty. First we crossed a long field, and then rested for some time, and then decided to go vertical. 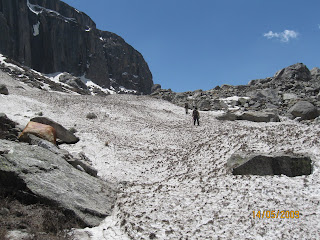 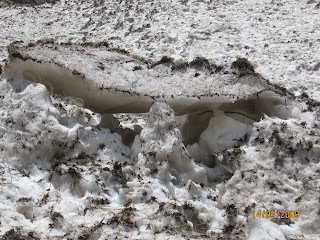 Here's another waterfall that could never quite reach the ground, for reasons other than the wind. 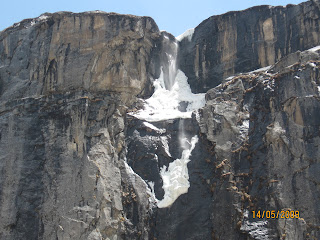 They call this the THUMB for obvious reasons. They can call this other things too, but then, hey, this is a politically correct blog. 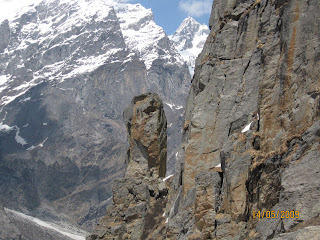 Majestic sight! Oddly, my mind for a fleeting second did go to Majestic in Bangalore. 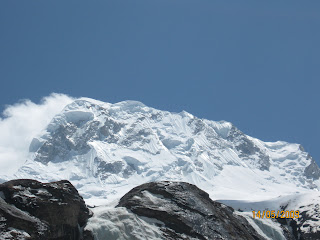 After lunch that did not feel much like lunch, we started climbing uphill again through glacial ice. Slipped on a few occasions, but steadied without damage. The shot below shows the source of Alaknanda river - a.k.a Alkapuri. It has the Satopanth glacier on one side (seen here) and the Bhagirath Kharak glacier on the other. Actually the term glacier, meant to me a vast flowing field of ice. Over here, there is a flowing ice field, but it's covered with rock, dirt, gravel and all. 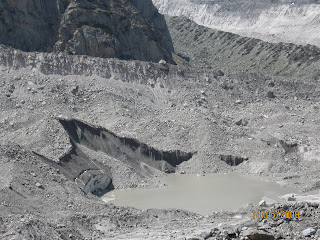 You have to keep moving to stay where you are. 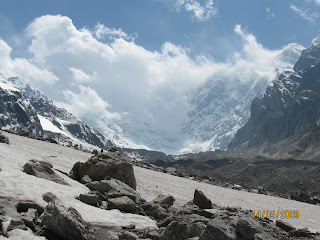 This is Sahasradhara – the spot of a thousand waterfalls. Apparently we came at the wrong time, because all of those springs had frozen up. 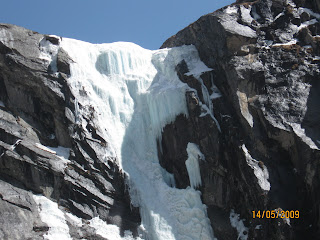 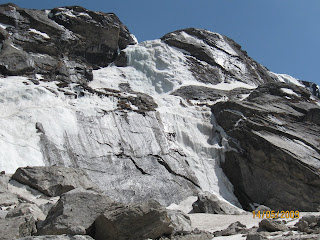 Next up was the vertebra. Here's a close up of the vertebra, carefully crafted by the forces of nature. I had half a mind to stop the trek and get back to civilization. The views were just too good, mind you. But I was tired. Shylendran was in better shape. But, frankly I just wanted to stop the trek for the day, and just idle near Sahasradhara. 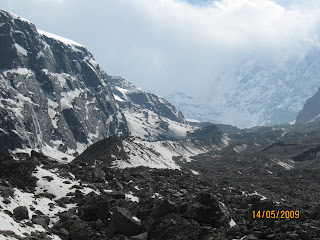 By this time, I was crying out to Mannu to stop this madness and camp somewhere. He said we have to reach the old base camp of Mt. Neelkanth, which was apparently very close. I learned not to believe mountain goats like him in the next two painful hours. :-) Finally, after a lot of boulder hopping (and, as usual, our entourage leaving early, to set up the camp) we reached. We could see the camp from a distance. 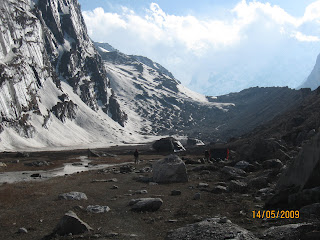 Shylendran went ahead full speed and I was surprised at his energy while I huffed and did puff. I found the reason for his enthusiasm after I reached. (Sorry Shylu. Couldn't let this opportunity go:-) 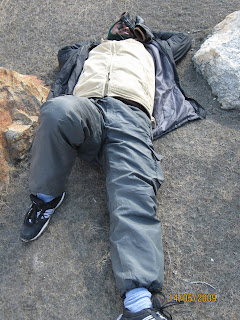 I had tea and biscuits, and roamed around (within a 100m radius mind you) to take some snaps. Sexy camping ground! 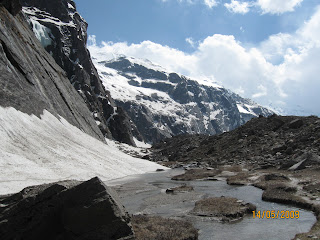 We had dinner, and went to sleep in some time. It was a tough day, but the altitude we gained, the wild terrain, the old base camp location with our personal stream in front and the gigantic massif of Mt. Neelkanth towering above us – all of this more than made up for the fatigue. I was thinking about my family as I went to sleep. My son was 5 months old, and must have been wondering where that tall fellow was. Would I be able to explain to him, why I did this, even if it was for a few days, leaving him, and his mom who was not in the best of health? Of course, my in-laws were there, but then again. Hmmmm. I had a troubled sleep that night, troubled not by fatigue. Fatigue had vanished from my list of worries.

Now, as I write this after about 2 years, I don't think I will have to explain why.
He should be able to find out. 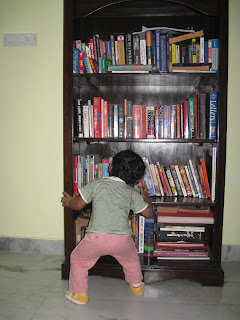 The final part can be found here.