Arnab v/s Rahul. You say it best...when you say something else..

It was like watching dialogues from two unrelated movies stiched together. Yes, I'm referring to the much celebrated Arnab-Rahul interview. I took to reading the transcript after I found it tough to move beyond the first 15 minutes of the actual interview on youtube. It was one of those videos, where you would rather see a message that says "your program will end and an advertisement will start in 5 seconds".


I read the transcript and then did a Ctrl F in Microsoft Word for a list of the most used/abused words, and kept a count of who blurted them out how many times. And the disconnect between the number of times these words were uttered by Arnab and Rahul should tell you a story. The thingies in italics are my insertions. 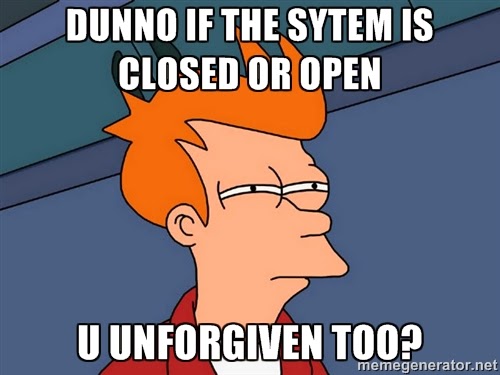 (Trainers: When in doubt, blame the system - whatever be the question. This is vital in surviving Arnab. Suppose he asks you a tough question, like, what do you think about the impact of inflation, don’t say some nonsense and expose your intelligence, or the lack of it. Be smart, say that the real problem is not inflation, the real problem is the system, which we have to change.)

This was possibly the question that was on top of everyone’s mind (Modi versus Rahul, or Modi as PM). Not one straightforward answer. There were seventeen questions in which Modi was mentioned, and there were three responses involving Modi in the answer.

Sample:
-----
Arnab: Narendra Modi calls you a Shehzada, a) what is your view of Narendra Modi b) are you afraid of losing to Narendra Modi, Rahul please answer my question as specifically as you can?

Arnab: You are avoiding the question

Rahul: No I am not avoiding the question (I am actually busy answering another question...can't you see?)

Arnab: My question to you is, what is the Congress Vice President's view of the BJP Prime Ministerial candidate?

Rahul: I think we will defeat the BJP in the next elections (Sonia: Mera beta solid ban gaya hain(wipes a tear).)

Arnab: And what is your view of BJP's prime ministerial candidate? 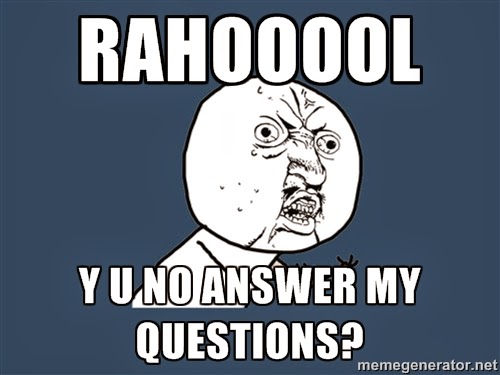 (Trainers: When cornered in a personal manner, start referring to yourself in third person. People will think you’re talking about someone else. Saala Arnab ka bhi fuse confuse ho jayega.)

Reminded me of a Dilbert cartoon:

Keyword: Women
Arnab: 0 times
Rahul: 18 times
This one was a googly. There were no questions about women in the 80 minutes interview. However, they just appeared everywhere in Rahul’s responses. Modi, BJP, growth, corruption, Priyanka - whatever be the question, women had to appear.

Keyword: Process
Arnab: 5 times
Rahul: 24 times
Sample (Rahul): There is a process. See there is a legal process. And that process is on. Okay.

(Trainers: If you think you’re overusing system, try process. Process is an interviewer killer term - Arnab will look like a fool if he responds to you saying I don't want to hear about processes.)

Keyword: Empower
Arnab: 2 times
Rahul: 23 times
Sample (Rahul): Everything we have done over that last 5-10years, in fact if you look all the way back to the freedom movement (now, don't ask me about 1984 riots, I was not there, but I was there in the freedom movement.), every single thing we have ever done is empower people (yes, emergency, riots, corruption, every single thing). We empowered people in the freedom movement, we empowered farmers in the Green revolution (some losers hung themselves later, what am I supposed to do?), and we empowered the citizens of India when we did the telecom revolution (and when we did the citizens in the 2G scam). We have empowered millions and millions. (You wanna corner me? I’ll empower the shit out of you too.)

Keyword: Real issue/Real question
Arnab: 0 times
Rahul: 10 times
(Trainers: Beta, we already discussed this in the inflation question. If you’re clueless about something, insist that the real question is something else…like Sunny Leone for example….anything other than what is being asked.)

To top it all, Rahul himself blurted out his interview strategy. Don’t believe me? Here’s the transcript:

Rahul: It is like in our mythology when they talk about Arjun, he only sees one thing, he does not see anything else, you asked me about Mr. Modi you ask me about anything and the thing that I see is that the system in this country needs to change, I don't see anything else and I am blind to everything else. Whatever you ask him, he's going to say that it is the system’s problem. It eeez because he eezzzz the blind, my booyyyyyy, he eezzzz the blind, to everything else, and apparently it’s a virtue, like the one Arjuna possessed. Good that you know your Mahabharata, Rahul. But I sincerely hope you have heard of another character in that epic, someone who was used by the Pandavas to slay Bhishma, the fiercest of warriors. But the Pandavas had people who could shoot from behind Shikhandi, the human shield. The Hand-me-down Party simply lacks that kind of firepower, even if Bhishma were to lay down his weapons.

Oh, btw, that reminds me of something Sheila Dixit didi had said. About a bunch of broom-wielding men from Ghaziabad (aka AAP)! I hope you guys have not outsourced Shikhandi's role to them; it's actually a pivotal role, especially in an era of Arjun wannabes.

Bush, Palin, you should really check out this guy, no kidding!

Disclaimer: The chat transcript is a property of TOI. Used in public interest. I am not responsible for choking, seizures, empowerment, disembowelment, or any other medical disorders you might experience after you click on the link.

One should not remain incarcerated for long. But, what would you know about incarceration anyway? Doc walked in with the usual nonchalant  disgraceful look on his face, the same look he has after every vacation. I tried not to make eyecontact. He must have seen through me, I guess, so he asked....

D: What's up with you today? Hope you're not wincing in pain or something.

D: Then why the faraway look? And tell me...why exactly why did you refuse to take medication, while I was off on vacation?

(Medication, vacation, nice rhyhme) Nothing Doc. (Think fast, Think fast) I'm not a good finisher, that's all. It's been always the case.

Yeah, a new one for you, not for me. When I was in young, I would do close to the impossible, and when people were in awe, I would drop the ball (or baton or whatever) in the final lap.

D: Ouch, I don't see how that helped.

It did not, it did naught, Mark! And later on in my life, when I thought I had a handle on things, I did some serious shit, and (surprise) it all came to nothing, in the end. This was college, mind you. But, then again, I still thought I was young and learning. I mean, how can I be so wrong. I'm not a bad (you're thinking "mad") person.

Nothing worth recanting. It just kept on repeating all my life, all my freaking life. I just don't finish stuff. And it's not just the drugs you prescribed while you were on vacation.

D: Ok...so you think you were the problem, or was it the people around you, or the circumstances?

It does not matter, does it? You are around me now. Does it matter to you that I did not swallow all the pills you wanted me to chew? What if, I don't? Is it your problem? No! It's just that I don't finish well. That's all.