The importance of being Harvinder Singh!

This article is a stub.

As a friend put it, “The Surd guy is pretty much a national hero...”, the one who slapped Pawar. The guy who brought Anna's true feelings toward politicians to light. Not just Anna, a lot of people might have thought the same way that night.

Sharad Pawar (I’ll call him SP) makes me feel so minuscule. He is the president of the International Cricket Council. Now, that is a super full-time job, considering the UDRS and all that dope stuff. In the meanwhile, our resourceful SP also finds time to be the world’s second largest population’s Minister of Consumer Affairs, Food and Public Distribution. In his solemn ministerial duty, he presides over one of India’s worst periods of food inflation. His mantra as a minister is this – "wait, it will come down".
And, btw, just because SP can multitask, he is also the president of the Nationalist Congress Party, one of India’s political parties that owes its origins to its opposition to Sonia Gandhi. Well, SP is a minister in a cabinet that is headed by Sonia Gandhi (forget MMS). Did you read that properly? Well, it helps in understanding the quagmire (bullshit, to be politically correct) that the world’s biggest democracy is in.
Oh, and I forgot to add, SP is also the Minister of Agriculture. Now, either he is the father of multitasking or he is what he is.
And while we are at it, tell me why Azharuddin was trying to become the President of the Badminton Association of India?Because he was good with the bat? He is not alone - VK Malhotra of the BJP, is heading Indian Archery Association. (May be the bow/arrow Shree Ram connection?)
Leo Tolstoy’s short story ends this way.
Pahom's servant came running up and tried to raise him, but he saw that blood was flowing from his mouth. Pahom was dead!
The Bashkirs clicked their tongues to show their pity.
His servant picked up the spade and dug a grave long enough for
Pahom to lie in, and buried him in it. Six feet from his head to his heels was all he needed.


Tamasha is a form of art. When practiced repeatedly on citizens, someone is bound to get offended and pick up the knives or guns. Why do we like it when we slap our politicians? Because, our politicians are just that - politicians - not statesmen.
Harvinder may end up in an asylum. But the spark of that slap might just reverberate. Who was that fellow again, who threw bombs at the parliament? No – not Afzal Guru. The name started with a B. A Big B.
Btw, we have spent close to 16 crores on Ajmal Kasab in the last three years. That’s close to 10 lakhs for every person dead in 26/11. I have a supari out on this puny blog –  2 lakhs for anyone who kills Ajmal Kasab or pushes him back to the shit-hole from whence he came. Send him back!
Posted by Sajish GP at 7:53 AM No comments:

Draw crap and erase it.
Then again, I'm not a cartoonist with a feather.
There's a first time for everything.
Don't just blame it on the weather.
Karma, and so be it.

Saif-al-Islam is Gaddafi's son. He is a PhD from the London School of Economics. Now that's a venerable institution, as venerable as them institutions go. But then again, there's this allegation of funds being funneled to LSE Global Governance. So much for a dodgy thesis. 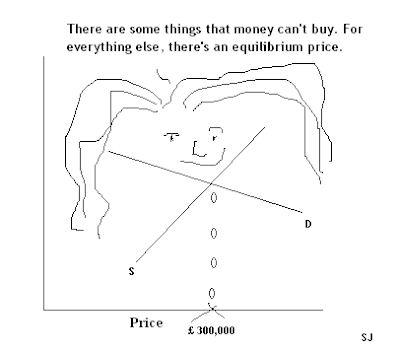 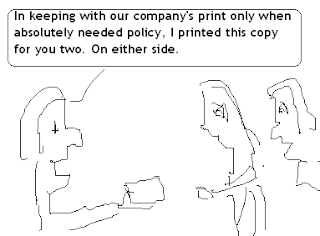 Review - The Adventures of Tintin

They made a movie called The Adventures of Tintin.We watched it. We occasionally laughed. At times, we were entertained by some special effects.

Like some people cribbed in early reviews, changing the characteristics of the characters was a bit uncharitable (Haddock kicking the bottle - not done!). But then again, it's better than killing Saruman in Isengard.

The experience was more comic bookish than movie-ish. Every frame, every good shot, sort of felt like it was made in isolation. The connecting thread was supposed to be the storyline. That kind of failed.

While reading those books years ago, I instinctively knew that there were connections - the story was unfolding with every square/rectangular box of letters and paint. But that was Hergé.

Now, I agree that movie reproductions cannot outclass classics. But, with Spielberg at the helm, there was hope. [Note the past tense, your honor.]

When I walked out, I felt like I was coming out of a cinema hall that our teachers used to take us when we were in school. Hey, wait - may be it is a movie for kids. I forgot to ask Kaira's opinion.

Anyway, going by a colleague's opinion, may be the movie is also good for people who have not followed Tin Tin keenly. May be. For puritans, go fetch some of them old books and read them again this Sunday.

Verdict: A "clean" movie. That's about it.


PS: If you forget to get popcorns during the interval, feel free to do so in the second half when Captain Haddock and the villain start fighting after manning two cranes. Tell me again, what was all that about?
And what happened to the eagle? (Waiting for guest appearance in part 2?)
And to that waterflow that was supposed to wreck havoc after Haddock used a bazooka on the dam?
And don't get me started about Tin Tin's tuft.
And I hate those goggles. They give me a headache.
And, unless you have closed the browser, why do I still feel like I have watched a sad version of the Pirates of the Caribbean?
Posted by Sajish GP at 9:07 AM 4 comments:

Part 1 can be found here.

The previous night's gala dinner was a truly fishy affair. Trust me on this one - the taste of all the fish that you normally buy from the market pales in comparison to freshly caught Nemos. I had heard this multiple times before, but this was the first time that taste hit me. It affected all the five senses - smell, sight, taste, touch, and hearing. (Hearing? Yes, ever heard fish being fried in bulk in coconut oil? It's music.) It also affected another sense - my sense of balance.

Next morning, we decided to go crab hunting. My wife started wondering if I had any intention of meeting other relatives. After all, we had gone to Kannur to meet her relatives and visit some temples. I categorically denied having discussed any plans like that, and went along with her cousin Jith, another uncle, and my father in law. Hey - they are also relatives.

First, we went and got some basic devices to catch crabs. Then we managed to get some chicken waste [Chicken waste for us - but these are essential parts from a chicken's point of view - legs, beaks, "flower" etc.] from a meat shop.Crab hunting was going to happen in the same stretch that we had gone to the previous night - to the estuary of Valapattanam river. 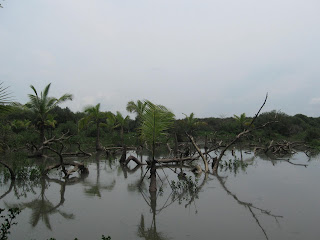 The walk to the fishing point was pretty slushy. We had walked this stretch with the aid of torches and lanterns the previous night. 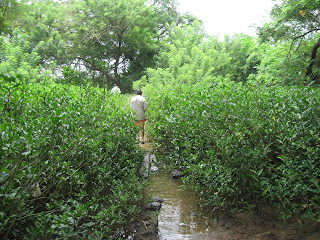 Water level started rising as we reached the end of marsh lands. 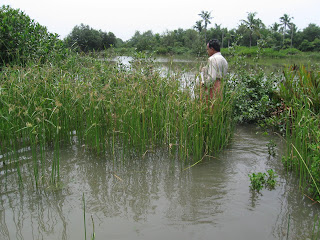 Our cousin Jith, tying chicken parts to the trap. The device is simple and can be made at home. 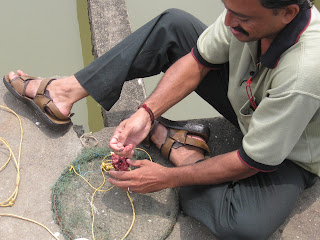 This is the trap. A simple net is tied around a steel frame. Ropes are attached to the frame to lower them into the water. The chicken "nugget" for the crab is placed in the middle. Unsuspecting crabs sense the meat, sits comfortably on the net, starts munching on the bait, and we comfortably pull them up.  No crab has ever lived to warn the others, so this technique has been in vogue for a long time. 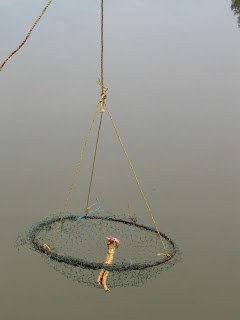 Throwing another trap into the water. 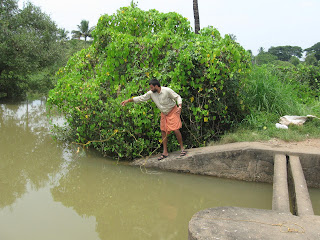 We just sat there idling on the banks of the river. Occasionally one of us would go and lift the traps to see if we had visitors. We were lucky a good  number of times. The beauty of the trap is it can be reused without even changing the bait. A catch can be seen in the pic below. 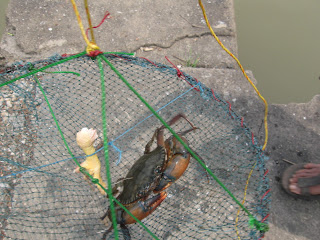 The weather was rather gloomy that day, but scores of mud crabs made up for it. Here's a fisherman on the river. 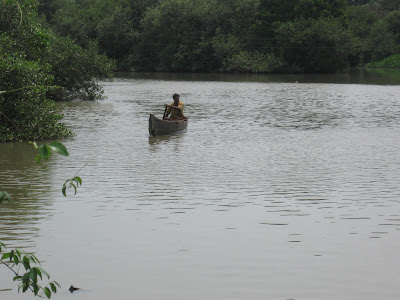 We kept putting the crabs in a sack, till we thought we had enough for lunch. Two or three times, we found two crabs huddled around the bait inside one trap. Guess they were having some quality time! Mud crabs don't look pretty, but they taste better than their seagoing cousins. 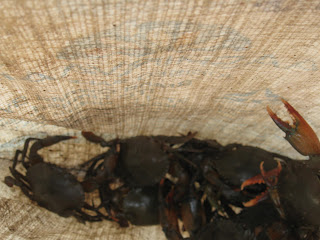 After the lunch, we relaxed for some time. Some more relatives had come to meet our family. But we had just not had enough fun and went for round 3 of fishing. We had covered the small neck of the river with a fishing net while we waited for the crabs. The catch was good.
I didn't bother to take pics, but after coming back home, had to photograph this beauty. To think that it was trying to get out of my hands an hour back! 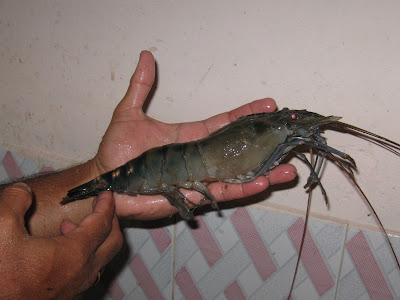 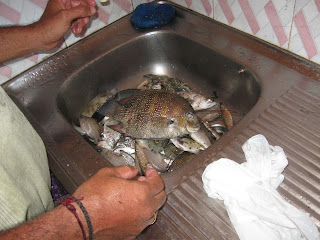 During the day, my wife had gone with some relatives to visit the temples and some other families. Generally speaking, there was peace all around. By the time we finished dinner that night, a consensus had emerged. It was official by then for my wife's family members - their precious had married a fisherman. One of these days, I'm gonna go there again. The river was in the news for some political reasons recently. I don't care as long as my  crabs and fishes are left untouched.
Posted by Sajish GP at 12:14 AM No comments: