The clouds over Hiroshima, were they edible despite the shape?
Posted by Sajish GP at 9:12 AM 1 comment:

The blood drops in Tianenmen, did they become square in shape once the tanks rolled past?
Posted by Sajish GP at 9:10 AM No comments:

Godse's bullets asked for permission before they entered. He replied "You may. I have done my part. The rest is up to God. Hey Ram."
Posted by Sajish GP at 8:27 AM No comments:

Starting of an itch

I'm in love with the world. Life has some short-term purpose again. I just spoke to my guide from a previous trek, Mannu Raawat, and I think I can plod on with some meaningful drudgery for the next few months. May be it's Roop Kund. May be it's Satopanth Lake again. Who cares, as long as the blankets are warm, the snows are deep, and the memories are there to keep.

Think Himalayas. The Last of the Mountains (Geographically speaking)

"If the mountain defeats you, will you risk a more dangerous road?"
Posted by Sajish GP at 3:20 AM 2 comments:

Quatrain 23232:
In the year 2nuts9, a roar will be heard in the night
The game would have changed before, as caddies took to fight
The baddie who shoots from the tee to the hole shall take a bow
As he shall stand alone - the tiger chasing the meow

Interpretation: Verdict is still out on this one. Scholars debate that this isn’t a prediction about Tiger Woods, because it’s way too obvious. And the usage of “meow” is deemed to be crass, considering it could be interpreted as a four letter word with five letters. According to historians, this was not one of the original quatrains, and not a true style. However, the point about caddies (and how one of them made it big in 2009) makes us believe that golf is being spoken about and TW might be the target.


Bonus prediction about the future of the current recession:

Quatrain 23221:
The fires shall settle, and green shoots1 shall appear
Dwellers of New Amsterdam2 shall heave a collective sigh
Unknown to dumb asses, the dragon3 will shift the gear
Chaos and plunder, bid the dollar good bye

1. Positive economic indicators
2. Old name for New York (That was the name of the city during the times of Imposterdamnus).
3. China

This is a story of Yuan revaluation, and the coming economic crisis, if Imposterdamnus is correct.

Historians also debate that the third line was different originally in the scrolls:

The fires shall settle, and green shoots shall appear
Dwellers of New Amsterdam shall heave a collective sigh
The dragon that cares two hoots shall shift the gear
Chaos and plunder, bid the dollar good bye
Posted by Sajish GP at 9:59 AM No comments:

This is a stub. Will be adding more data soon. I felt I had to post this partial entry today.

Our President (Pratibha Patil) today expressed dismay about rampant alcoholism in Kerala. She was surprised that a state so highly placed on social indicators (health/Quality of life/Literacy etc.) could be like this.

Yes Ms. President. Mals had overtaken Sardars years back in per capita alcohol consumption- and since then, there's been no turning back. Sustained growth of 20% + year. Successive governments raised prices at every opportunity with the stated objective of discouraging this practice (More revenues for the govt. is an unproven allegation). The governments knew the mallu psyche. They worked harder each day to keep up with this government sponsored inflation of an essential commodity.

And here we are. This year booze revnues are expected to touch 5,600 crores ($1.25 billion) - from Beverages corporation alone. Beverages Corp. is the state sponsored alcohol wholesale monopoly. Add the bar revenues, sides (Pepsi, soda, chips, pickles, mutta puzhungiyathu etc.), tips, Toddy revenues, Military canteen flow, cigarettes, smuggling, illegal arrack packets etc. this figure could be anywhere close to 10,000 crores. 2010 we will touch 12-15k confidently, whether the economy recovers or not. That's something like 2-2.5 billion dollars. Come to think about it, the world's tallest skyscraper cost $1.5 billion. Mallus could quit drinking in 2011 and make two towers like that (one in Chaalakkudi and one in TVM), and name them Burj-alc-OC and Burj-alc-Honeybee, and still have change for a few beers per head. 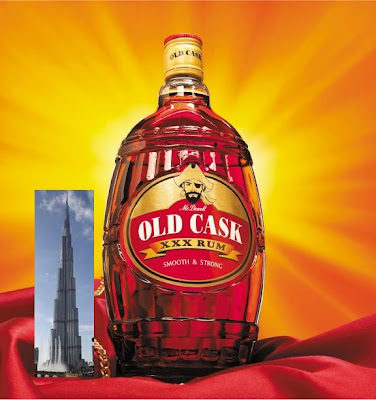 Economics of Drinking
Because of the high prices, we have to work harder than the rest of India to make the money to drink. That hard work ensures that we always operate on the efficient production possibilities frontier (and on some days like Onam and Xmas, we push the frontier a bit, violating one of the holy theorems in Economics). This Xmas, this tiny state sang Hallelujah with 28 crore worth of booze - Santa must have had a tough time asking for directions.

I have a suggestion. List Beverages Corp on the stock exchanges. Trust me, the high-seeking mallus will ensure that it trades at stratospheric valuations.
I'm already drooling at the idea of the ever-elusive perfect hedge. Buy a full bottle and hedge it with stocks in this company. As a clan, spend money and drink in peace, while you watch your investment grow.
Watch out - this could be India's next big IPO. Hic Hic.

By the way raising such sin taxes is a global phenomenon. The Greek government recently increased taxes on alcohol and tobacco. From BBC: "The Finance Ministry said the measures would increase revenues. The Finance Ministry also said the increased taxes on alcohol and cigarettes would deter consumption, "to the benefit of public health"." Notice how every administration gives equal weightage to government wealth and public health.

Whatever said and done the Greeks better get their act together.
Posted by Sajish GP at 9:48 AM 2 comments: