II. How Ayda came to be

Every child in Ayda knows about its origins. Their knowledge isn't complete, but it goes like this.
Hundreds of years ago, there existed beyond the Eastern ridges of the Kshitidarr, a land called Halyian, one that was more bountiful than Ayda, thirteen times its size, with a huge sprinkling of people. The world of Eywa was not known in its entirety then. And before then, nothing is known, except that people loved what they had, hunting game and perfecting the fine art of growing seeds into food that fed their clan. They settled in Halyian, at the time when the Great King united their clans into one common brotherhood.

The kingdom flourished, but like every thing else, all good things must come to pass. There came a wave of destruction and death, so forceful and unforgiving, that the Great King had to flee. And away they moved to the mountains to escape, where two fears crossed. They feared to step on the mountains, for the Gods they did worship dwelt there. But, overcome by fear fed by evil, they did decide to make the traverse over the Eastern ridge. At what cost, they were to lament, for all the seasons to come.

On the lower reaches, they waited. Much to their relief, the reconnaissance party that had gone ahead had found a pass, dangerous but not insurmountable for the strong and able. Some of the weak were to be left behind. On the next day, the Great King and his best horsemen started first, with prayers of forgiveness on their lips for stepping on the abode of the Gods. Little did they know that pleasant weather was soon to give way. Storm clouds whirled over the mountain in a matter of painful moments engulfing the royal party. When the weather finally cleared, all movement that could be noticed from below was an eagle that circled close to the pass.
Led by their Queen, the remainder of people who made their way to the pass the next day saw below them, in the depths of the mountain, the remains of twenty horsemen who had fallen to their deaths in an icy lake. The storm had blinded the Great King and his best men to their fall. Saddened, but spurred on by what lay behind them, the party pressed on with their march into the unknown. They moved very slowly, weary from hunger, cold, wind, and fear.

The marksmen guarding the rear were the last to make the traverse. When they finally joined the party, they brought with them the news that all those who were left behind were never shown the mercy of death by those whom they were fleeing.
One more day passed, till all could finally rest. When they did, they made a cairn just below the snowline on the other side of the mountain, in memory of the dead and all whom they had left behind. The Queen decreed on that day that no man, woman, or child was ever to cross the cairn of the Great King, for evil lay on the other side. And the noblest of the royal family, no less, would stand guard. From the highest foothill there, as the mist lifted, they sighted Ayda, and they were indeed the first men to do so. They felt a strong warm wind in their faces, one which gave them some relief from despair. It was from a sea, which they did later discover and name Valle Annar.

Email ThisBlogThis!Share to TwitterShare to FacebookShare to Pinterest
Labels: Ayda

I. The Pain of Ayda

The Queen Mother looked around from the window in the morning, as the first rays of Vetar kissed her kingdom. Perched at a small elevation, the nucleus of the kingdom was a perfect vantage point. She watched with contentment the numerous villages that surrounded the palace and the lush farmlands that stretched beyond them as far an hour’s flight for the strongest eagle in her aviary. In the distance she could see the foothills and the permanently snow-capped peaks of the Eastern ridge that marked the end of the Kshitidarr, the Great Mountains. It was said that Kshitidarr kept all the rainfall sent from the heavens from escaping the realm of Ayda. Beyond the ridge, lay lands of barrenness for distances obscene, where birds died of exhaustion before they found a trace of life, if the bards are to be believed.

There were signs of peace, and peace alone, all around. Peace, along with the years of prosperity brought boredom alongside. A little kid in a farm far outside the crown couldn't help notice that even the corn was bored by the constant iAydanaction, even when it swayed freely to the westerly breeze. The western winds picked up some speed toward noon and carried with them a wailing that was unnatural, nothing like the kid in the farmland had heard before.

The Princess had passed away, and the golden vibrance of the palace suddenly seemed to have peeled away to welcome shades of white, grey, and black. The Queen Mother, however, was not one to cry. Her watchful eyes carefully flitted from the eyes of one courtier to the other, whose sorrow knew no bounds. She was looking for a sign behind those tears and beneath those voices, for the princess died not a noble death. Moments after the spirit of the Princess of Ayda drifted away from the world of men that noon, her body had turned a ghastly blue. For strange as it may sound, poison was unheard of in Ayda, and not a snake ever hissed in anyone’s living memory.

A few moments passed and the Queen quietly made her way to the antechamber. Moving the linens from the windows, she saw the fluttering regalia of the dispatch riders, eight of them, on the best beasts in the kingdom move swiftly to the East. Leading the pack was Aniveh, her eldest son. They soon would pass the news to the King, the seer who dwelt in the highest foothills of the Kshitidarr. Much ahead of them riders, she saw Garde, the fiercest of her kind, with the mournful message tied to her talons. The Queen sensed discomfort, watching Garde flap her huge wings in the horizon, the span of which became a tad smaller with each passing moment, to her anxious eyes. She looked down at the fields, and found her anxiety heightened by the rays of Vetar that bounced off the polished shields tied to the backs of her dispatch riders.

The Queen Mother looked away.
Posted by Sajish GP at 10:31 AM No comments:

Email ThisBlogThis!Share to TwitterShare to FacebookShare to Pinterest
Labels: Ayda

Scientific research has shown that the intake of beverages like beer does influence the amount of micturition (yeah).
Nobody's paying me for this. In a generous display of generosity, here's a free ad for Kingfisher beer. 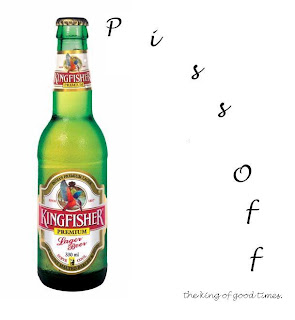