The Gods of God's Own Country

When I left that morning with Abu, on his rickety motorcycle, I had no clue where I was headed. He just asked me to carry some cash (2,000 Rupees).  "Get that cash, and just hop on, you jackass," he said in his usual style.

I was miffed as I had a lot of important things planned for that day. I had to get Sameer to give his gala treat for getting hitched. I had to plan for a major sora for Saleem’s wedding (In Northern Kerala, it has become customary for friends to play pranks on the groom and bride, usually of the embarrassing kind. They call it sora.) More than anything, I had planned on editing the crap out of my to-be FB profile pic and earn a few hundred likes.

All my plans just vaporized in the smoke that the 90’s vintage Hero Honda bike belched out in a ride to a place that I never knew. “Arsehole, whereTF are we going,” I asked Abu. He laughed at my question and said, "To the heaven of Abu, the Hoja Maharaja."

Whatever bullshit that meant, I said, in my head. After about  three hours of riding, we stopped by a roadside tea-shop (which can pass for a mini-restaurant in these parts on a rainy day, which it was today), and I realized that we were at Adivaaram, a village in the foothills of the Western Ghats. It had started to rain. It was spooky, with the dense jungles nearby contributing in no small measure. It was just a drizzle, but we felt otherwise, thanks to the impact of the droplets on the tin roof of the shack.

Someone kept a handle-less red bucket below the leaking roof in an apparent attempt to harvest rainwater.

Everyone around seemed to know Abu. I found that strange. I mean, people far removed from “civilization”, wearing their lungis and little else; people caught in the transition between mainstream and tribal life; with the never-been-to-a-salon-in-life looks; old and young alike, they stood up and greeted Abu.

"Chaatha, how are things at home? Did you enroll Vellan at school," Abu posed the question at a definitively dirty-looking old man in a casual tone that seemed to suggest that he was one among them (which was not the case, of course). "Finding food for my family is more than tough, Abbu, and you’re talking about Iskool?" Turning around and introducing me, Abu said…"Chaatha, this is my close friend, Noufal. He wants to see your settlement." Chaathan agreed. I was like wtf. I never volunteered that kind of stuff. And, what good will come from visiting his village hamlet? But, so it began. Another long bike ride, but this time, with Chaathan sitting in between us. Classic threesome on a twin-seater bike!

In the middle of all this, we stopped to do a bit of shopping. Abu took the cash that I had, added another 2.5k and purchased some rice and groceries from a sad excuse of a shop and handed it over to Chaathan. I wondered what was wrong with Abu, and what he was up to. The rain grew a tad heavy, and I had a nauseating time at the back of the bike, wiping off the raindrops from my face, which were ricocheting off Chaatan’s naked upper half.
The years it rode were audible from the bike, with parts of the contraption making all sorts of noises of protest, at this unruly treatment with a heavy payload on a hilly road. Abu kept chatting with the fellow, and at some point I stopped caring. We moved off the pot-holed tarmac, and into some really wild roads, and I think I dozed off around that point.

When I woke up, about 15 minutes later, we were somewhere in a small clearing in the middle of the forest. A bunch of little constructions that stood there could pass for Neanderthal houses, made of clay and stone…with the thatched roofs meeting the ground in some places. Abu parked the bike and went into that community, as you would to your in-law’s place or something (assuming, you have happy in-laws.) The kids came screaming to him. They had met their Abu. They cared two hoots for the rain. Everyone, competed to invite Abu into their shelters. Abu kissed a kid that had an awfully runny nose. Yuck.

Chaathan kept the items we had purchased on the ground. Abu divided it and gave it to the five families of the settlement. I could sense an element of festivity around there, right then.
It was already around 4 in the evening, and my stomach was expressing signs of anger. “Relax,” Abu said. The rain intensified and the mercury seemed to dip with every passing microsecond. I was wearing just a thin polyester shirt, which my dad had gifted on my recent birthday. Wet and cold and shivering, I sat there, clinging to myself, wondering how this ordeal was going to pan out. Food takes longer here to cook. May be the wet firewood would have something to do with it. Hours seemed to pass by.

I looked around, and saw the kids, with very little clothing on them, hungry; waiting for the rice to be cooked. My hunger had explored the outer realms of its possibilities by then. Hunger and chill is a deadly combination, and I could not take it anymore, and I told my friend (who now was playing some silly game with a kid), “Buddy, let’s get out. It’s 8 O clock….getting bloody dark too.” Abu stood up. But then, a little kid walked in and offered me an old metallic bowl, filled with steaming rice, dal, a spicy curry, and if that was not enough, three or four chillies. The little urchin smiled at me as he dished out the fare. I'm sure he knew I was famished.

"Have it," Abu said. He sensed that I had a potential OCD hygiene issue. “Chuck your worries man, it’s much cleaner than the shit like chilly chicken or pizzas that you eat 10 times a week. These people respect food, as they would respect God.”

As I ate the food that night, with twenty other people for company, I realized that the nausea in my mind was weaker than the yearning in my tummy.

It was getting late. People were starting to "crawl into" their non-existent beds on the floor. Some kids wanted us for company, so Abu and I became their Teddy bears. Soon they fell asleep. I was tired and felt like sleeping over.

"Habit for these kids. They fall asleep in their trousers, or whatever little they have. They don’t complain.” Abu started. "I came here for the first time, when I was in college. I had to do a project on tribal settlements. The sight that greeted me was that of a kid being cremated. That little girl had died because of hunger. The third kid to die that year in this hamlet. I felt scared, angry, afraid…all at the same time looking at the faces of the little ones who were alive. From that day, I have never had a meal without thinking about these kids. I come here every month. I bring something, something that I can afford."

I thought of something to say, but was at a predictable loss of words.

"And, btw, I didn’t bring you here to show how cool I am or to take selfies with these kids. I had to show you this side of things. Last week, at Sameer’s wedding, you guys got drunk and dumped a lot of food in the well, remember? As part of the sora. Just for the heck of it…. That food could have saved someone here. I don’t want to give you a guilt trip, but the fact is that the kind of food that you wasted could have saved lives. Treats for everything, from increment, promotion, housewarming, new phone, new car, wedding…everything becomes an occasion to throw or ask for a party, an occasion to celebrate. Facebook, Whatsap, like, share, comment, profile pic….what kind of life are you leading, mate?”

He spoke calmly. The rest of what he said was a blur. I recalled the drama that I put up about hunger just some time ago. After he fell silent, I tried to sleep it all away, but could not. It was not the temperature or the place, it was something deeper.

A little while later, we decided to leave, and he kicked the bike to life. A little kid in his torn undies (undergarments would be an overstatement) who was feigning sleep heard the noise and ran up to us. I picked him up, and he kissed me on both my cheeks. There was a lot of snot, but I was beyond caring. In that little kid’s smile, I saw God and humanity together. I promised in my head to come back to Abu’s heaven and to Abu’s Gods.

I felt warmer than I ever have been.
-----
A painting to complete the picture. 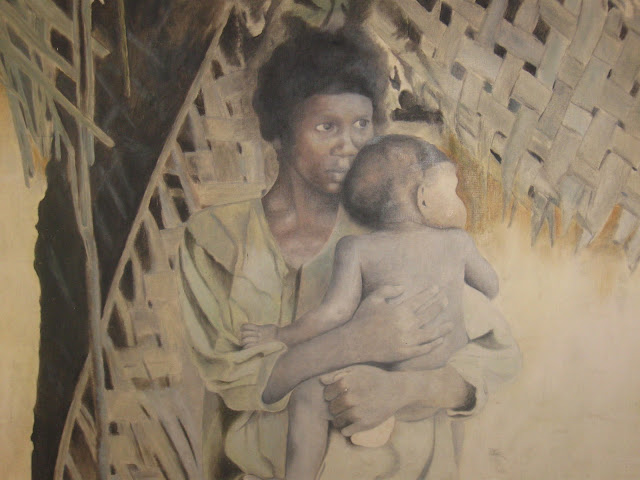 *I was inspired to translate this from Malayalam after I found this gem on Facebook in the middle of angst, political venom, wedding anniversary pics, Which Hollywood villain do you look like.. quizzes, motivational messages, and forwards. I do not know the author, nor have I taken permission to translate. Whoever you are, be just as good, if not more, but write more!