Doc, do you know what pain is?

Mental, the searing unbearable type, if we can discount all the physical harassment you give me in the name of treatment.

D: Haha. Sure pal, everyone feels it. If you ask me, I feel it all the time. But what I think is, and I could be wrong here, but....our minds are designed to take a healthy dose of real pain.

Mine isn't, which is why I ended up in your custody. And, what I'm talking about is THE real pain that comes from a feeling of helplessness. Guilt, which you cannot clear, which you cannot correct. The only way would be to go back in time.

D: Hmm. I guess that's not an option you're considering?

Nope, not yet. But...don't you think it's sad that life does not come with a Ctrl Z option? I mean, how can you live with that single formatting error you made that you cannot correct.

D: Wait a minute. Did you kill someone?

D: Did you bully the new nurse?

No, no, no! Mine is emotional, not a flesh wound, so to speak. That said, no matter how much you scream from the rooftops, the person at the receiving end of your lack of judgment would not buy it. And that's when you feel the real pain.

D: That part about the person at the receiving end.

D: Now, if that person really is a friend, someone for whom you mean something or the other way around, he or she would get it.

You mean I got all worked up for that?

Goddammit! Guess I added a lot of sad pus to a bad wound.

D: Something like that. And, by the way, in about 5 minutes, you're gonna get another injection. It would make you feel better.

Now is not a good time to talk about real physical pain, is it?
Posted by Sajish GP at 10:20 AM No comments:

Email ThisBlogThis!Share to TwitterShare to FacebookShare to Pinterest
Labels: Chronicles

High on Gross National Happiness - what the hell was that, I wondered, when I started reading about Bhutan. Is it all about shiny happy people inhabiting this country? Well, the people that we met in Bhutan, for the most part seemed to be quite friendly and helpful.That included the guy in the immigration desk in Phuentsholing, Bhutan who wanted 500 Indian Rupees per head in exchange for 500 Bhutanese Ngultrum (say it - Niltrum). We did not bother much as the exchange rate was anyway 1:1. Indian currency is in short supply in Bhutan, and a lot of officials have their kids studying in India.

Indians can enter Phuentsholing freely, but to go anywhere else in Bhutan, we need a permit. Like a lot of others, we were worried about permits (due to the scary delay stories floating around online), but thankfully, it worked out fast and fine for us because we had some resourceful people with us :). Both on our onward and return journeys we stayed at Midpoint Hotel in Phuentsholing, run by the affable Sonam Penjor, who's FB occupation status says "dishwasher at Midpoint". He kept the hotel and its kitchen alive for us long after closing hours, sang a couple of good numbers, and even crossed over to India to get us nicotine sticks. 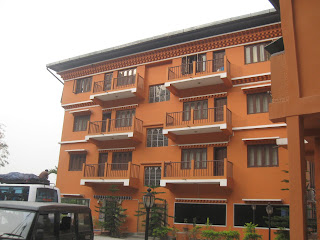 The song presented below is his own composition.


It was here that we learned the first few words in Dzongkha. Kuzuzangpola is the only one which I remember - it means hello. Later, I read that the concept of different greetings for different times of the day is alien to Bhutanese culture. Kuzuzangpola it is whether it's morning, noon, or night. 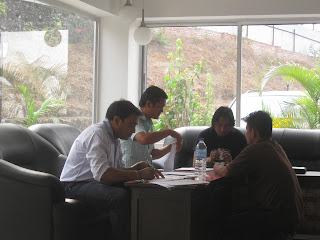 After the permits were done by around 10 O Clock, we drove for around 7 hours straight to Paro. The ride was beautiful, and we stopped occasionally on the permit check points and for refreshments. 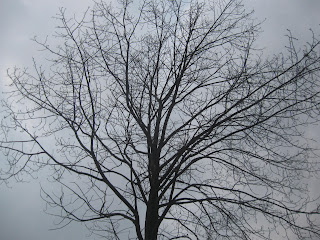 Paro is a town that seems to be frozen in time, from a few centuries before, save for the few swanky cars that make up for the lack of traffic.

We stayed at the spic and span Olathang.


Paro's main attraction is the Taktsang Monastery (the Tiger's Nest), planted right on edge of a steep rocky cliff. There's no point writing about the monastery. You have to see it to appreciate its magnificence, and while you're at it, think that it was first made while Newton was toying with the ideas of gravity. The hike up to Taksang is extremely beautiful, and not so difficult. It took the slowest of us about 5 hours to reach the top. 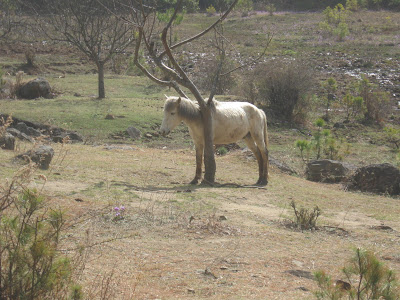 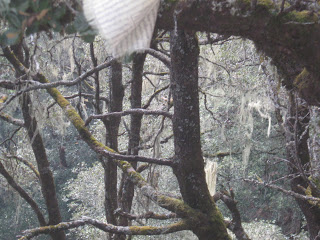 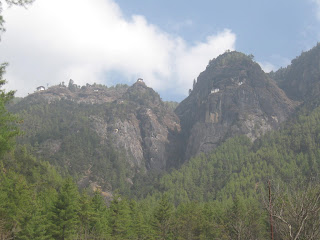 If you ever go there, one word of advice - the monastery seems to be a long way away and above (as in the pic above) for the most part of the hike. Do not be disheartened. Toward the end, it just presents itself, very much reachable, save the steep V shaped stairs that will take your breath and a lot other things away.

If you're spiritual, it's a pilgrimage of sorts. If you're a traveler, it gives you a sense of accomplishment. Well, the accomplishment would last for just a few minutes,  because just after reaching and depositing your camera and other belongings in the office at the front, all you need to do is look up, and see another maze of stairs leading all the way up into the monastery.

The people around, and I mean not just the Lama or the residents of the monastery, are extremely helpful and willing to answer your questions. You air a doubt about something to your travel-mate, chances are that some stranger will politely explain to you what you were wondering about. I asked a lady about a strange ritual that was going on and she explained that all you need to do to get something in life is - pray for it, look at the black spot on the big rock in front, close your eyes, walk with your hand forward, and touch the spot on the rock. It was one of those side-games, while the big show happens inside in this sprawling complex with its multiple places of worship. It seemed simple enough, and was worth a shot - what the hell, big deal, if you lose. I prayed for job satisfaction, marked the black spot out, closed my eyes, walked, and banged right against the pillar next to the rock.

The proof of le pudding:


While waiting for the rest of us to come down from the monastery, I chatted up with one of the security personnel of the monastery. I asked him about lunch options for 22 people. While talking about it, he laughed about his lunch. There are only two guards, and because of the rush of visitors, they never have time to prepare lunch. They usually skip it. I kept cribbing about the 22 hungry stomachs that we have, and he rushed up to his cabin and came back with an apple. Thanking profusely, I bit into the apple, and told him this was not going to help us in a big way. And that's when he told me he had just one apple. And I'm like, this man has had no lunch and he's parting with the only food item that he has. It's like one of those moments, when you start thinking - now what? He sensed it, and told me a simple thing - you said you were hungry, and that's why I gave it to you. I'm sure he would have parted with 22 apples, if he had them. The mystery of Gross National Happiness was solved that day - he was happy, because he was evolved, so to speak. He could have been the Good Samaritan in the Bible, the Buddha himself, or the Karna in the Mahabharata. God bless you Bhutan.

To Sonam Penjor, the lovely Pema Dolma and another Sonam at Olathang, and this security guard without a name - Kuzuzangpola from India to all of you. 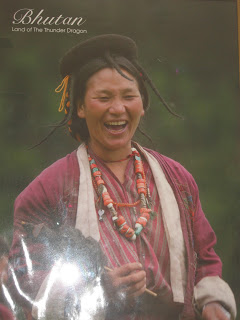 PS: To all Indians out there. It costs $250 every day for a foreigner to be in Bhutan, an amount that has to be paid to the Bhutanese government. Except, if you're an Indian. Go visit this marvelous country before the rules change.

PS2: We came up with a few words to describe trip:
Phuentsholification - The Phuentsholing experience.
Thukpaed  - The feeling you get after your tummy is full of Thukpas.
Parofied - The manner in which Paro mesmerizes you.
Beer Puri - Packed puri that loses its hardness after treating with beer (we only discussed that possibility).