Almost Duryodhan - The Story of a Pandav Mela

The first sight that greets you when you walk down the steep downhill path to Deira Village (pronounced dheda) is that of the experimental tea gardens. These add to the landscape of the Himalayan foothills. After about fifteen minutes of downhill walk, we reached Sunil’s house. Sunil gave us a token gift...50 Rupee notes to each of us. It was, apparently, a custom when someone visits their home for the first time...a custom that I embraced with eagerness because it was the 10th day after demonetization.

After a few quick bites and photos with the family, we made our way to the Pandav Mela, a festivity that happens in Uttarakhand villages every few years. When we reached, the Pandav Nritya (Dance) practice was underway inside a shamiana enclosure erected to keep the chill winds of November at bay.

Deira’s Pandav Mela was returning after a gap of 23 years, a bit of a long gap so you could excuse the participants for being a tad rusty. The dance was slow with the participants swaying softly to the drum beat. Draupadi, the wife of the five mighty Pandavs, suffered from arthritis, judging by the way "he" moved. Subhadra looked as though he was in a trance. Yes, it was an all-male cast, Kunti being the only exception but we were yet to see her. Hanuman looked tired. Yudhisthir, the eldest of the Pandavas, was a class act ...he wore sunglasses to round off his Mahabharath attire. The steady rhythm and the slow dance continued for a while, with the entire village for an audience. 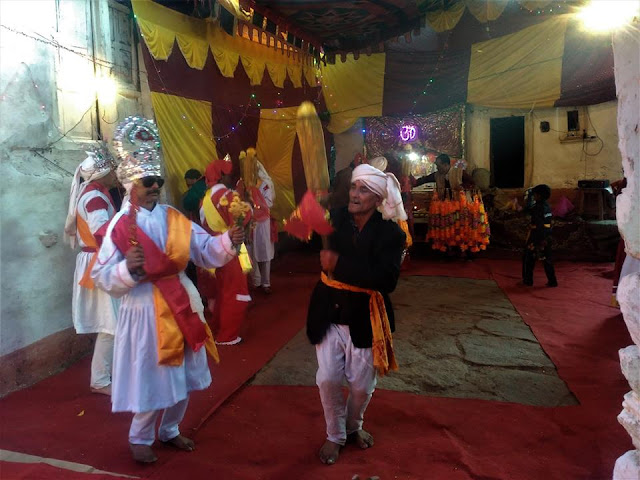 After thirty minutes, there was a short break, and the emcee announced over the public address system that the Pandavas were now leaving to bring Kunti Mata from her house. Bheem and someone less obtuse walked up a flight of stairs. I followed them in hot pursuit after checking with the village elders if it was alright to do so. There, in the verandah of a house, sat Kunti, the mother of the Pandavas. The elderly woman playing the role of Kunti started bawling when she saw Bheem. They tried to console her, but nothing seemed to help. Kunti held them close to her bosom and cried. Bheem, of all people, was in tears. 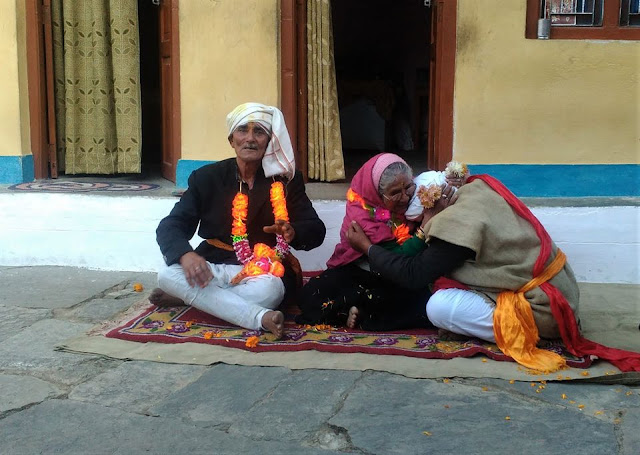 Someone placed two plates in front of the trio - one filled with jumbo-sized laddus, another with apples. Kunti Mata took a laddu and shoved it into Bheem’s mouth. And Bheem, known for his gargantuan appetite, came back for more. Again and again, till the laddus were finished. The guy on the right side did equally good….and between tears, they must have had a dozen jumbo sized laddus and fruits. The two drum guys played on in a neatly synchronized manner. I was offered tea. 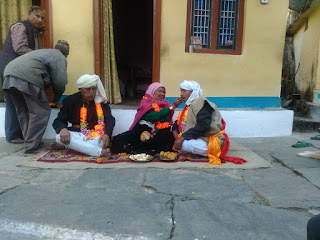 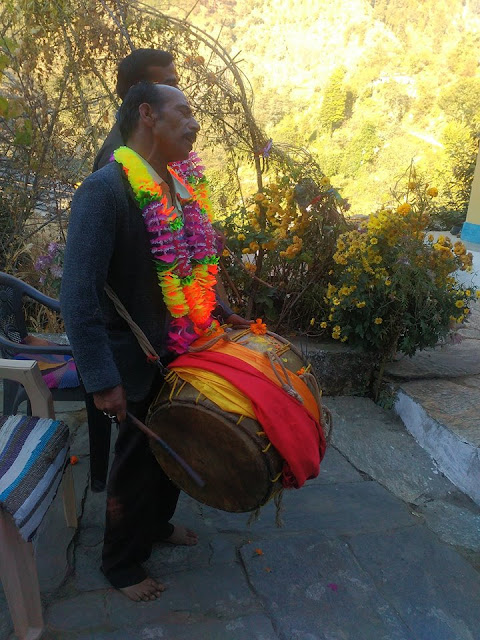 Meanwhile, there were murmurs among the crowd sitting below...possibly getting a bit restless inside the shamiana. The emcee announced “Bheem aur baaki paandav Kunti Mata ke yahan khaana kha rahe hain. Woh thode der mein yahan aa jaayenge. Tab tak aap bhi jo hain, apna enjoy ka aanand lein.” (Bheem and Co are having food with Mother Kunti and should be here soon. Till then, you too enjoy with your fun. Enjoy ka aanand!) Bheem and the other fellow lifted Kunti Mata, placed her on their shoulders, and walked down. 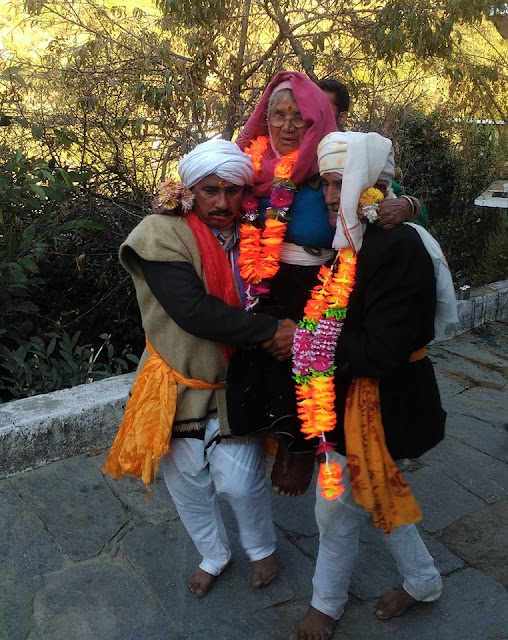 And...the slow rhythmic dancing commenced again. I had just about settled down when someone came around serving steaming tea in paper cups. I declined in a matter of fact manner: “No thank you, I just had tea from Kunti Mata’s house.”

Pandav Mela is organized in many villages in Uttarakhand, usually in the month of November. That is also the time when little farming activity happens if I am not mistaken. It’s an elaborate affair which involves most men in the village. Those who do not participate have to pay a small daily fine to the village. The practice sessions are held in the afternoon and night for 2-3 hours for a little less than a month. They also get invited to perform in neighboring villages. Among other things (a cough), a ban on alcohol consumption is enforced by the womenfolk and the men are expected to comply (else, fines and penalties, and even threats of banishment from the village).

While walking up from the village, I realized that there were no Kauravas on the show and asked about it.

Apparently. the only Kaurav who would participate in the Pandav Mela is Duryodhan, and that too on the last day of the month-long festival. There will be a final battle between the Pandavas and Duryodhan that will be played out in the village farms, away from the shamiana cocoon that we were sitting in.

Who will be chosen to play Duryodhan, I asked?

"The strongest from the village, someone who can holler at the top of his voice and make the village tremble."

That said, a week later, we walked the 2 feet wide footpath down to Deira yet again, but this time it was late in the evening. The winter chill had intensified. There were now two makeshift shops near the shamiana. Sunil mentioned that there would be a freestyle dance session at the end, something that excited JK, the dancer/performer/artist in our group. We sat there just like the last time appreciating the cast and their slow swaying dance. The newest addition to the crew was Bal Krishna, an adorable little girl dressed up as Lord Krishna.

The occasional whiff of the beedi, the drum beats, the cheerful squeal of little children, the slow intoxication of country liquor consumed an hour ago (brewed by the 35-year old wife of a 90-year old Nepali husband), and the almost mystical rhythm was soon interrupted by a person who made small talk with JK (who unfortunately does not speak Hindi). I intervened. It turned out to be a Jawaan (soldier) in the Indian army. I get excited when I talk to soldiers, but my intervention that night turned counterproductive from the moment my first question to him rolled out of my mouth: “Which regiment do you belong to?”

“How many regiments do you know of?” He responded with a counterquestion.

“Well, I know a few.” And I proceeded to rattle off a few names.

“Civilians normally do not know so much about the army. Why are you here? How do you know of this village?”

I gave a patient explanation about our work with Cafe Buransh in Sari village. But, he persisted for a while with his questioning and my blood started to boil. Then he turned to JK, who had no clue of what we were talking about.

“You were speaking in Urdu till now. And now you change your language.”

“Urdu? What Urduu??” JK’s eyes widened in disbelief as he gathered that single word from the soldier’s script and realized its import.

“Enough!!! Are you guys spies?” the soldier thundered.

I have been accused of being many a thing in the past, but this was a first. There was no point in continuing the conversation so we requested our friends in the village to talk some sense into the fellow's military cranium and left it that. The freestyle dance action was about to start at the other end and this was the last bogging down we needed.

Sunil said he will take fix it and asked me to donate something for the event. (It’s a custom. You bring fruits which will be distributed to the audience or you contribute something...any amount). We gave a small donation, which the emcee took as an excuse to introduce us to the audience: “These people have come from Kerala, the most literate state in our country with extremely intelligent people.” I felt like climbing up a flag post or something and sitting there till the show was over. Either that or borrow Bheem's mace for a second to make it quick and clean. 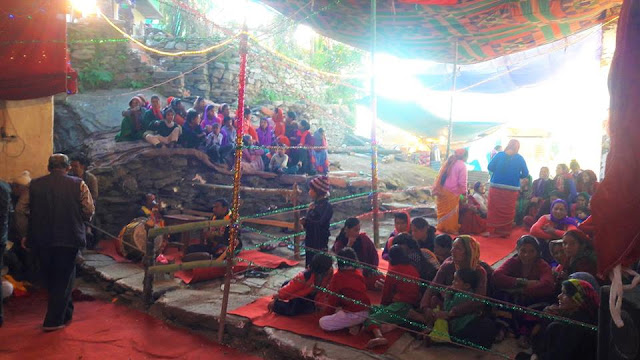 We participated in the dance along with the Pandavas trying to mimic their swaying motion without much success but with much mirth. That continued for a while till the emcee announced it was time for freestyle. The drum beats picked up. A fellow from the village did a short solo dance that I attribute more to the lax enforcement of alcohol ban than to anything else. JK sensed his opportunity and he leaped on to the stage. I am not sure as I write it about it now if it was Bhangra or Dappankuthu, but the crowd loved it. Truth be told, the women went absolutely bananas and started whistling. In what would go down as a first in the history of Pandav Melas, the emcee announced something to the effect of “Aurat logon se ek nivedan hein. Pandav Mela ke dauraan, kripayaa seethi math bajaayiye”. (Request to all the womenfolk. Please do not whistle during Pandav Mela!)

Like all the good things, this too got over sooner than we would have liked. We said our goodbyes and started our tiring trudge up to the road. Surprise! The soldier rushes in and blocks our path! Before I could wonder “what now”, he touched our feet, hugged, and said “Galti se ho gaya. Apna bhai samajh ke maaf kar dena”. (I made a mistake. Consider me as your brother and forgive me.)

At that exact moment, all the chill surrounding us vanished. The irritating interlude meant nothing at all, and I said to myself...“You could have been Duryodhan….you were almost there...almost.”
Posted by Sajish GP at 7:52 AM No comments: