I never knew hunger for the first 15 years of my life. I could not comprehend it, as food was available all the time. My first personal taste of it came in college, when some times I wouldn't even eat when I had the money, preferring to spent it on delights more fluid in nature.

Of course I had seen beggars on the street and stuff like that, but the brush with real hunger waited for a few more years before it presented itself. It was one of those evenings in Masjid Bandar in Mumbai. I was walking to my office for the evening shift editing content for a metal industry news portal. Some parts of India's commercial capital could also be the shanty capitals of the world, giving the Brazilian favelas a run for their money (or the lack of it). Masjid Bandar isn't that shanty, but you get the paan stained, jostling, noisy dirty street, vada paav, street seller, thick autorickshaw fumes idea.

I stopped at an open-air Chinese food outlet, which serves dishes, some of which the Chinese may not have ever dreamt about. I picked chicken fried rice, and started shoving it down my hungry oesophagus in a hurry. Someone prodded me from behind, and I turned around to see this guy, possibly 14 or 15 years old, wearing a pair of torn trousers, no shirt on, unkempt hair, and the works.

Using the hand-to-mouth action, he indicated that he could really use some food. He looked hungry to me (and he wasn't asking for money - I hate that.)and I ordered a half-plate fried rice for him. The person manning the food joint just placed the rice on a big dry leaf and gave it to the fellow. Normal people too get it on the dry leaf, but there's a plate placed underneath. Hmmm, I was in no mood to fight discrimination.

Any way, the fellow took the food, kept it on the pavement, and sat there. I went back to the process of shoving my share down, thoughts shifting back to work that's to be completed. I was shocked back to the real world in a second as something wrapped around my legs real tight. Looking down, I saw that the hungry fellow was hugging both my legs in one huge grasp, looking up and crying.

I almost kicked his hands away, kept or threw the plate, gave the cash - all in a matter of a few seconds. And ran..literally ran to my office. Upset was not the word. In some time, however, the rational stuff kicked in. He looked haggard, but ok. Why can't he find a job, any freaking job? Why should he beg? etc. etc.

But the question remains to this day - what level of hunger can drive a man to the feet of another to express his gratitude for food?
Posted by Sajish GP at 1:48 AM 1 comment:

Third & Fourth Estates: Businessmen & Media. Yeah we know, they are not all that pristine. Jr. Ambani was barred from capital markets recently, and it’s not big news. I checked just now, and there's just 329 news articles on google news, after 5 days! When Harshad Mehta was hunted down, it made big news 15 years ago. And after he was arrested, or something like that, he alleged that he gave one crore to the then PM, PVNR. Dismissing the bug bull’s claims, the late, K. Karunakaran, then the CM of my state, said something to this effect “At the state-level 1 crore means something. At the central-level, what is 1 crore?” And we laughed it off as a society. Like, we ignore the banning of one of the richest men in the country now from the watering hole of capitalism – the stock market.

Even before the Radia tapes, I hated media. Not the jealous type of hate. I hated the high falutin stance of the new media breed. On any issue, they had taken the role of the jury, the lawyers, and the guillotine man in one sweep. And I hate that much power vested in one leg of our Octopus society.

I for one, wanted to be a journalist, years ago, when I was getting stifled by steam tables, gas dynamics, and Laplace transformations – during my engineering.

Sometime later, I applied for a Certificate Course in Electronic Journalism. The day of the interview to short list candidates was a shocker. There were 40 or 50 aspirants, and they had to filter it down to 25 people. I knew I would sail through, when I heard two people discussing things around me.
Guy1: In this course, I heard, they teach you to go to the Internet and find relevant information.
Guy 2: Really, I have used e-mail before, but this will be so cool.

I was like “get a life fellows, the world has moved on” and walked into this auditorium where 5 or 6 doyens of the press were gonna interview me. They sat on an elevated platform where politicians sit for press conferences. They asked me to read two news articles, journo style, one in English and one in Malayalam. Did those in a pretty suave fashion. And then they asked a few questions, and I answered them well (Yeah I did). Then they asked me if I had any questions. And I asked something like (smacks head now), in televised press conferences, I see some relatively arrogant comments from politicians, and I see the people from the press laugh. How do you explain this, considering it’s your duty to grill them to get meaningful information to your audience?

Some senior fellow in the dais said something to the effect of you will know the pressure of it when the time comes. And it ended. I walked out feeling confident, and the coordinator told me he will get back to me.

When I went down, I saw an elated Guy1 (mentioned above) pumping his fist, because he had been selected. Guy 2, who went in after me (who could not even speak properly), and came out barely a few minutes later, also was selected. And that day, I got the essence of I will get back to you. In retrospect, I didn’t lose much. But, as a candidate, that was a depressing experience. Failure gets to me, even if it is (or is not) of my own making. T/F you – TVM press club.
Posted by Sajish GP at 7:34 AM No comments:

About his pilgrimage experience to the Amarnath cave, Swami Vivekananda once said, "I thought the ice lingam was Shiva himself and there were no thievish Brahmins, no trade, nothing wrong. It was all worship. I have never seen anything so beautiful, so inspiring and enjoyed any religious place so much."

A lot of other big places of worship in India still reek of corruption at all levels, starting from special darshans to bribing officials, priests, and what not.

Recently, I'd been to the the temple of Kanya Kumari (Cape Comorin) that possibly is a few hundred meters from the rocky island on which Swami Vivekananda meditated. Vivekenanda rock, with waves of three major oceans/seas caressing its periphery, is still a charm. I first visited the rock some 20 odd years ago, and my memories from those days more or less matched my current experience. Pretty good.

The Kanya Kumari temple visit was a disaster. There was a long queue to start with. We saw that special darshan tickets were on offer at Rs. 50 or 100 per head. Though not a great fan of darshans, I thought, hmmm, let's get done with this quickly. As soon as we moved away from the main queue, a temple official approached us and told that special darshan tickets alone will take us only so far. We have to pay him 100 bucks extra, per head, so that things can move like a tsunami inside the temple. A cop was overhearing this conversation, and pretended that he was hearing nothing. (Yeah, slap me, for thinking a cop would...)

Disgusted, I told my dad, let's go with the main queue, which now looked like it was making some progress. My bad. After we got sucked into the main queue, it stopped. For half an hour. I was thinking this is impossible. But the solution soon presented itself. Agents appeared offering to rescue us from the hardship, if we paid the special fees and a discounted rate of 50 per head as dakshina ("sweat equity" for the lack of a better translation). Now this line is formed around the temple, with iron grills on one side and the wall on the other. I realized that we had become a captive audience -with no means of escape - for these fellows. We declined, as the line started moving again.

Another 50 meters of movement, and another painful halt. For 10, 20 minutes. We decided, enough was enough, and broke our chains of bondage, as soon as we saw an opening in the iron grills. Walked out like free men and women. While walking out, one of the agents we met earlier appeared again with a discounted fare of Rs. 20 dakshina per head plus special tickets. I was pissed at the whole affair, but it's a family affair, and one or two of us was against the idea of walking out of a temple totally. I went in.

Thanks to our guide, we sidestepped the 10 minute queue for special tickets, and procured those in 2 minutes. Normal - good service, I thought. Not bad for 20 bucks per head.

And then the queue for darshan remained, which may take another 15 minutes. Our guide pulled me back as I was walking towards it, and pointed in the opposite direction - toward the exit from the sanctum sanctorum or the garbhagriha.

I was like, dude we want to go in. And he was like, listen dude, I know a better way. Now the exit from the sanctum sanctorum at the Kanya Kumari temple is a small one. The door is too short. People kind of crouch to get out, and we could see a lot of them making their way out. Our guide jumps in, stops the flow, pushes us in, against the flow of temple traffic, and in 3 minutes me and my family are standing in front of the deity. I don't know what I prayed. I didn't think I did pray at all.

And in 3 or 4 minutes, we came out the same way we went in. Like food that goes in through the rectum and comes out the same way. Disgusting quick s#@$. And we purchased it for 80 bucks for the four of us adults and a kid + the special ticket fare.

Gods must have fled these places of worship a long time ago.

I think sometimes it's better to be an atheist who believes in god.

And his hands would plait the priest's entrails,
For want of a rope, to strangle kings.
-Denis Diderot
Posted by Sajish GP at 6:55 AM No comments:

You need an image for everything. So here's oneindia.com's image of a rape. 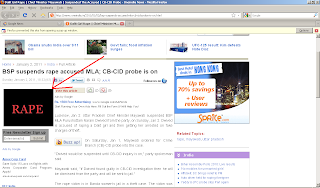 Hindi Terrorism? Was Rahul thinking of Sonia's mastery of the language? 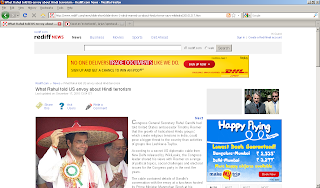 Now, this is some elephant. 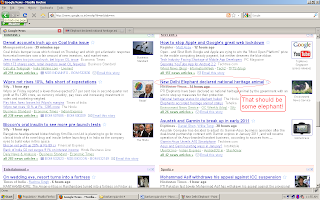