About the place: Satopanth Tal is a lake 22 km from Badrinath, in Chamoli District of Uttarakhand. The trek starts 3 kilometers from Badrinath, from a place called Mana (3800 m), officially the last Indian village. Mythology has it that the Pandavas undertook the journey along this route on what was their last sojourn. Beyond the lake is Swargarohan Mountain from where Yudhistir (the eldest of the Pandavas) apparently ascended to heaven (the rest of the crew fell by the wayside).

Starting the proceedings
We reached Delhi Interstate Bus Terminus (Kashmir Gate) at around 1.00 A.M. Buses to Haridwar are available round the clock. There's a loo where the board says its free if you're just taking a leak, but you gotta pay for further indulgences. There's a shirtless rough-looking fellow who sits/lies down next to the board to collect money. Last time around I was here, he (or someone like him) wanted a rupee or two for taking a leak - right below the board which says it is FREE. I decided to test if that was still the case. I asked the fellow and he says it costs a rupee. To irritate him, I pointed at the board (just like I did last time) and told him it was free. Typical response - "board and all is there, but you better pay up if you gotta go".

Satisfied with the minor tiff, I returned to bus hunting. Shailendran, an old and very good friend was my travel partner for the trip. Surprisingly, all buses to Haridwar or Rishikesh were coming in to the bus terminus filled with passengers. A Sardarji offered a taxi for 3,500 (bus - Rs. 150). Politely refused, and the fare dropped like NIFTY last year - to Rs. 2,500. Refused again for whatever reason running through our minds. We stood around waiting for buses, every time disappointed to see them coming in full. There were seats on buses to places like Dehradun, Kotdwar etc.

Obviously people were getting into the buses before they even came in to the terminus. We decided to move on in the direction where the buses were coming from. Soon enough we saw a bus coming in and it had no destination board. There were only three or four passengers inside. People were banging against its doors. The conductor sat inside, seemingly oblivious to all this noise. People were asking him about the destination of the bus but he was silent. Shailendran checked with one of the passengers already on board and discovered that the bus was in fact going to Haridwar. People were getting impatient..and the conversation went like this....Arrrre...ye bus jaatha kithar hai? (Where the hell does this bus go?)....Conductor: Aapko kithar jaana hai (Where do you want to go?). Almost all of them said Haridwar/Rishikesh. He seemed to think for a while and replied that the bus was going to Kotdwar. Disappointed, the crowd left murmuring (Pehle kyun nahin bola, saala). Shailandran confirmed again with the passenger that the bus was in fact bound for Haridwar. We just stood near the closed door and I asked the conductor where the bus was headed. He repeated the question..."where do you want to go?" I said "Kotdwar" with a smile. He had a smirk in his face, looked around to confirm if the people had dispersed, opened the door saying...chalo Kotdwarwaale aa jao.

He was fooling people, but it was his way to ensure that there was no stampede in his bus. Must be a real pacifist. The journey of a 100 miles thus started with a single lie.

We reached Haridwar by around 7 in the morning. Thanks to rucksacks that we kept on our laps, it was relatively easier to sleep during the journey. We were headed to Joshimath that day. We negotiated at the taxi stand, then went to another private fellow, and then came back to the taxi stand to settle for 3,500 bucks to take us to Joshimath. We quickly went to Har Ki Pauri, had a refreshing bath in the Ganges and came back by around 8 to start our journey.

Rishi was our driver, pretty smart chap at that. Elections were going on and he predicted that Harish Rawat would win from Haridwar. There was a BJP opponent Swami XYZ, and I asked him why a Swami would not win from a place like Haridwar. His reply was succint "Haridwar mein to sadhu log bhare hain" meaning Haridwar is filled with Swamis. 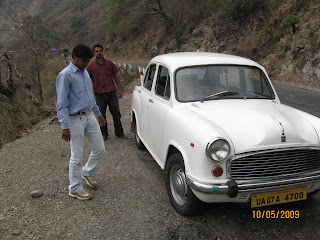 We had our lunch somewhere near Srinagar and reached Joshimath by around 6.30 in the evening. Here's a sweet color diarrhea on the way. 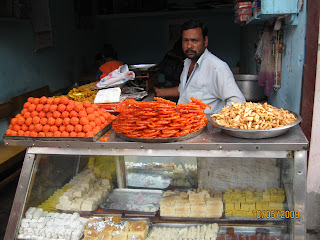 We had our first sight of the snow clad mountains a few kilometers before Joshimath. We were a bit upset before the trip, because the winter this year was relatively light, and snowfall had been scant. There was little chance of walking on ice or snow - a bit depressing for people from the southern part of the country where the only ice ever encountered is inside a refrigerator.

We stayed at the Nagendra Lodge in Joshimath, an inexpensive option. Given below is their tariff board with interesting options for a linguistic connoisseur. You choose the Dormatri option only if you're Russian; and the last option is for you if your idea is to create lots of noise and possibly bring in hookers:-). 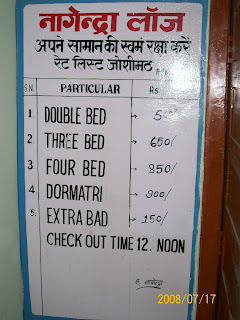 We were greeted the next day morning by fresh snowfall in the distant mountains.
Here's a Joshimath morning video:


Elated, we went out to get the inner line permit from the SDM at Joshimath. Certain weird things happened w.r.t to permits and I would not want to write about it here.
Election rallies were going on. Here's Khanduri (Uttarakhand Chief Minister), addressing an election rally. 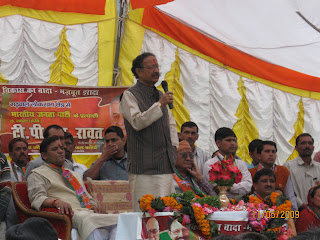 People from above watching the election rally. 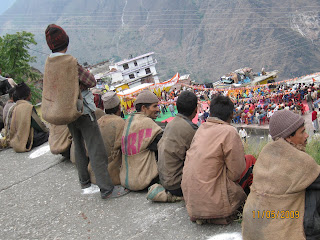 We called up our guide, Mannu Raawat, who sounded a bit upset with the fresh snowfall, but anyway asked us to come up quickly (we wouldn't have delayed anyway:-)).

It was raining heavily by the time we left from Joshimath. We took a shared jeep that cost us something to the tune of 150 per head. The rate sounded a bit steep, but it was raining, and a small killing can be overlooked. The only problem was that there were 10 people and 2-3 kids in the crowded jeep. The front row seated four of us including the driver. Every time he had to change gears, he would literally push me, and I would lift my right leg, feeling the uncomfortable gear moving this way and that, right beneath my leg.

The crowded jeep pic. I never realized that a Jesus look-alike (no offence meant please) was there behind me. 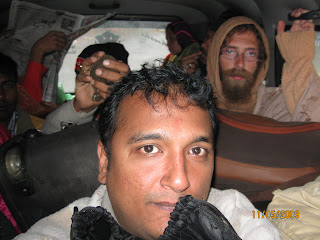 Light snowfall greeted us at Badrinath. We checked into an ashram, and quickly came out to do some shopping and exploring. Snowfall had given way to a light drizzle. We picked up two pairs of shoes from a shop run by a Tibetan lady. The price was ok, but we realized during the trip that we needed something better.

We then moved on to pick up some second hand jackets. Two guys were running the shop. We picked up all the stuff we needed, called up Mannu from their mobile phone, had tea inside their shop and topped it off with a smoke. Customer service doesn't get better than that - no I think it was a sort of camaraderie, they really wanted to talk.

The next day morning we had a bit of scuffle, as I felt the Ashram fellow had gone back on the verbal commitment about room rates. It was double. The rates to start off were low, but sometimes it's not a question of the quantum, it's about ethics - usool. 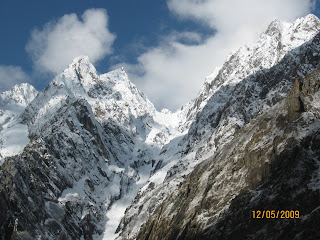 We went near the temple, took a bath in Tapt Kund (a hot water geyser). Its scalding hot in that weather, but the moment you enter fully, it's manageable - in fact it's enjoyable. It's a sulphur spring, so it's better to avoid flipping and floating in it for long. Had darshan in the temple. In my excitement to try and ring a bell tied at some height, I accidentally spilled the contents of the pooja plate from a lady standing behind me. Should've seen her face. I immediately gave her my Pooja stuff and pacified her.

After the darshan, we checked out of the Ashram and started the 3  kilometer walk toward Mana village. Vehicles ply till this village. The "last village" designation, has done good for the place in the last few years from tourists looking for photo-ops. Mannu Rawat had arranged for our accomodation. The weather had cleared, it wasn't cloudy or snowy anymore.

We had met at least five or six people who offered to be our guides to Satopanth Tal. They must have gauged from our backpacks, that we were probably on our way to something long. Shrugging everyone of, we reached a coffee house and we called up Mannu from a local phone, and presto, the place where we had stopped was in fact our accommodation. A small decent room, right at the cross roads between the small trails to Vyas Gupha (cave) and Bhim Pul (bridge). We met Mannu in a few minutes - first time, after months of phone calls, bookings, and other arrangements. He is a sturdy looking fellow -very healthy and lean for his age.


After discussions, we went for the short walk to Bhim Pul. Here's Saraswathi river from the top of the bridge. Spurred by the pristine look of the water, we decided to go downhill to get a better look. Here's the river, up, close and personal. 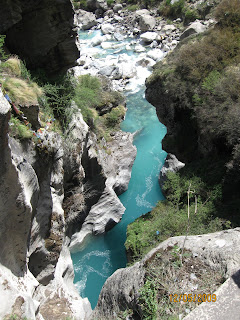 
On the little climb back, we noticed a cow that had fallen to it's death. 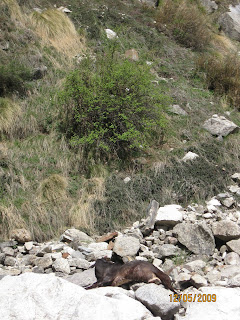 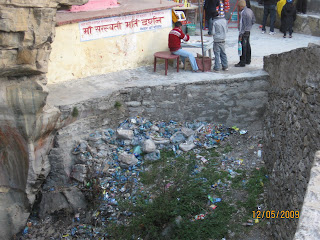 And here are a few dwellings of the village from a distance. 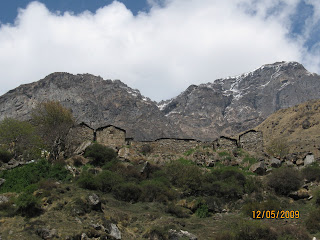 After a walk with Mannu to Ganesh Gupha, Vyas Gupha (where the Mahabharath was apparently delivered), and the last tea shop in the country, we went back to our room to start an anticipatory night of tossing and turning. Dinner was served in the room. There was loud music playing some where in the background, but we shrugged it off and went to a quiet night's sleep in the last village in the Indian territory.