The time was 2.30 AM. Palani was visibly very upset. Peering into the black Scorpio that was parked on the road parallel to Santhome Beach in Chennai, he asked us why we would not go fishing with him. We told him that we we were waiting for Vinoth, another fisherman from the same area, who had already agreed to take us out into the sea. Palani wasn't convinced and stood around for 10 more minutes complaining before leaving to man his boat, but not before exacting a promise from us to travel with him on our next foray into the Bay of Bengal. While promising him, I was wondering if there would be another night like this, and whether I would enjoy this outing, despite the fact that I was looking forward to it. It was my first time on a boat in the sea, and adding to the anxiety was the absence of a life jacket.

Santhome Beach is a minor hub of piscean trade in Chennai. Our car was parked right in front of the lighthouse, and all along the road, on a normal morning, when the sea is not rough, you can expect scores of fisherwomen in the process of haggling prices, calling out to potential customers, and cutting and cleaning fish (when they are not extolling the virtues of what they sell or when they're not cursing). Nirmal, a colleague of mine, and Harry Benhur, an architect working with us, had been camping in Chennai for the last few months on a company assignment. What connects the three of us is a love for fish - so much volumes and varieties of it, that it would send shivers down the bone, shells, and squigglies of any edible aqua life-form in the vicinity. In a matter of a few weeks, Harry and Nirmal had earned a reputation among the fisherwomen of the area as big-ticket spenders who know their fish - a reputation buttressed in some small measure by a couple of visits that I too made. From just being friends of sellers of fish, our contact list grew to add a few fishermen in the area. So, it was no accident that a desire to go out into the sea on a minor fishing escapade came up. There were quite a good number of them willing to take us out, but just because of his presence the previous day while we bought fish, it ended up being Vinoth.

On that day, Vinoth came in a bit late, but by around 3 AM in the morning, we were all ready to go. He filled the tank of the boat's engine with diesel from a 2 liter Pepsi bottle. The boat is rather shallow, so when you sit on the edge, you feel, well, a bit edgy. Dozens of other boats raced away from us roughly to the same fishing grounds. It's gripping to watch them launch into the sea, the motor power helping them cleave their way through incoming waves at rip-roaring speed. This was our boat: 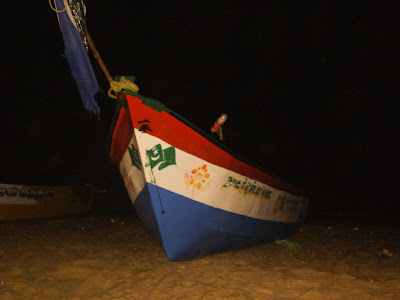 Launching a boat is pretty simple (for them, i.e.). Contrary to what one might expect, the heavy wooden structure moves with relative ease in the soft beach sand, as I found out. 4-5 people push it till it barely touches the water. And then, the wannabe fishermen (like us) jump in, while the others push it further out into the water. The crew then jumps in to the boat in a swift motion and starts the engine, and vrooom, we are off, splitting the oncoming waves in two on a journey to greater depths. In the process, we were greeted by a welcome spray from an oncoming wave that should have been miffed at the intervention!

We zoomed further into the sea for around 40 minutes and then stalled. We had covered about ten odd kilometers. The lighthouse beams and the lights from Chennai harbor were still very much visible on an otherwise cloudy night. The lights acted as some sort of reassurance that we were not that far as indicated by the 10 kilometer count horizontally, or the depth of about 10 meters vertically. As we slowed, we found time to shoot some pics. The boat was still  rocking from side to side and it required multiple takes to get a picture one can recognize. That's Nirmal and Harry! 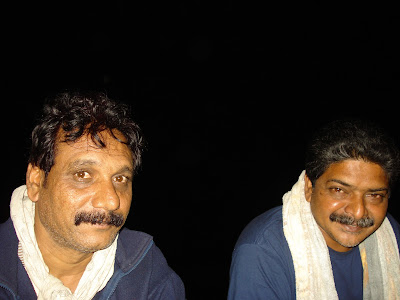 This is Vinoth, our captain, carefully handling the rudder. Truth be told, the dazed look on his face is just exhaustion. I could have taken a better picture with him in the center of the frame, but the effort would have found myself in the water, due to balancing issues associated with a rocking boat. 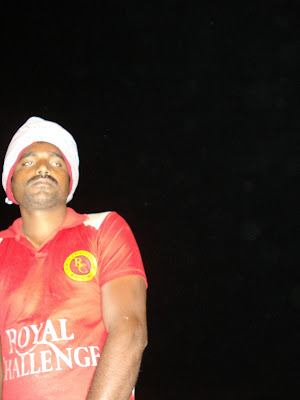 Soon the time came for lowering the fishing nets in to the water. We had two of them. I thought this process would end soon. 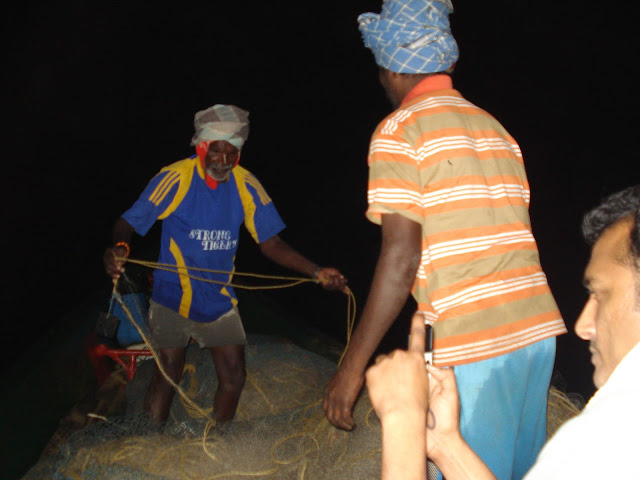 I was proved wrong and how! They kept dropping layers of the fishing net into the water and it would never end. The flimsy looking layers of the net kept coming up like a never ending sari. I was reminded of Draupadi and her situation - the net was that looong. I was told that each net was about 4 km in length. While Vinoth idled the engine and kept steering at a mild pace, the other two crew members kept dropping the lines for about a little more than an hour. An hour, that much of fishing lines in water! 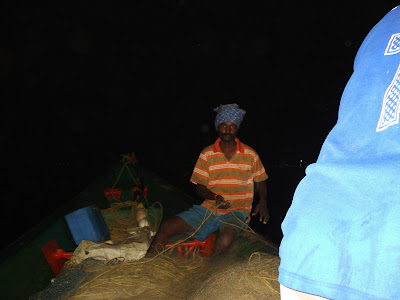 After the lines had been dropped, we went on a 1 hour picnic mode. Vinoth switched off the engine and switched on some music - melodious old Tamil songs.  We brought out some chicken and bread, and some beverages. We had a nice conversation while we waited for them fishes to get trapped in the nets. That's Vinoth's dad in the center, Vinoth to the left, and his eldest brother to the right. The crew was family! 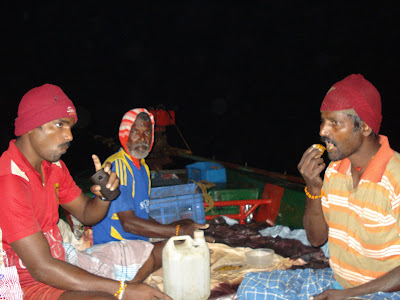 Nirmal, out to prove he is more of a fisherman than them fishermen! 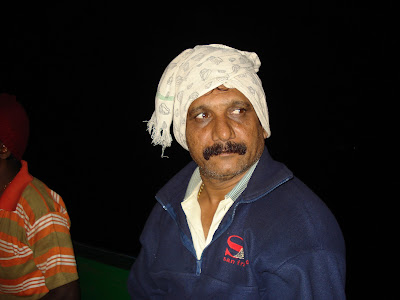 The conversation became personal at some level at that point with Vinoth's dad expressing his misgivings/disappointments in life. He was too old to be doing this, I told myself. And looking at the dark sea which lolled around us I was tempted to think about the sea within. The sea was just too beautiful in its scale, like the mountains up north. I blocked out the music and the chatter and could actually hear the ripples mildly hitting the boat. 10 minutes into that reverie, Vinoth yelled out to me asking if I wanted to puke. I was like, WHAT? He said he felt so coz I had that look (of a man who is about to puke) for a long time. Hmmm.

I found a nice space of my own. Nice backdrop of the harbor lights! 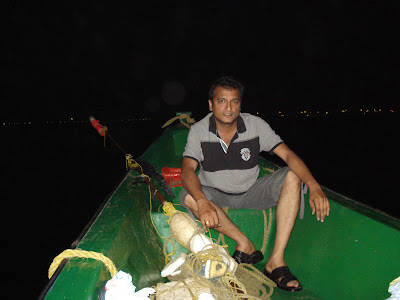 Picnic time was over soon. We had been out in the sea for about 2.75 hours now, with the last hour waiting for the fish to get lured in to our cumulative 8 km long nets (4 x 2). The previous day's outing had been disastrous for the crew, with a measly catch, and I found myself praying for them to get a bounty. You can't go so wrong with 8 km of nets, can you? We were only hoping for the smaller types of fish, because we had not come that far in to the sea where the big tasty daddies roam. For that, you would need to venture at least 40-50 kilometers, and ideally have better equipment. Vinoth did say that he would have gone all the way, had he had a bigger crew, which he could ill afford.

Here's them drawing the lines up. You could see the fish trapped in the net. 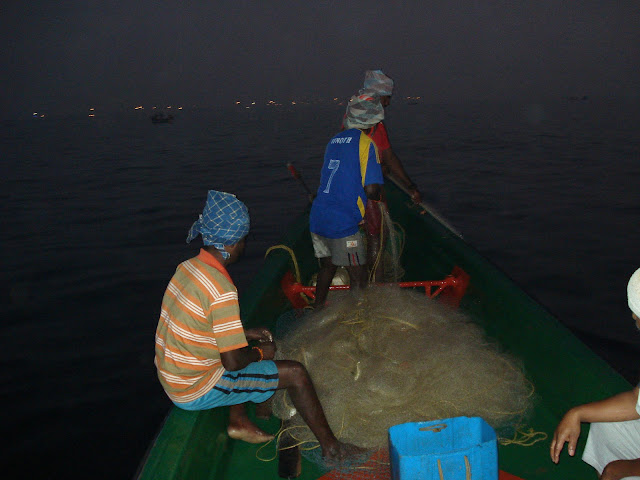 The day was breaking, and we could take clearer pictures. Here's the engine that made it all possible. The award for the best supporting actor goes to: 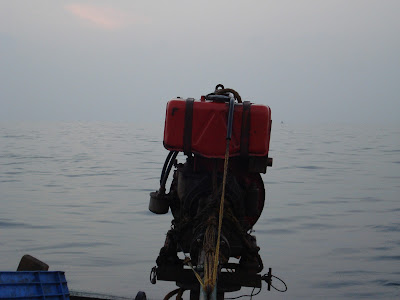 In the pic below, you can see Vinoth's dad wearing a jersey with his son's name on it. You can also see the fish entrapped. The choicest of them (Lady Fish) were plucked from the net and put aside in a blue container. 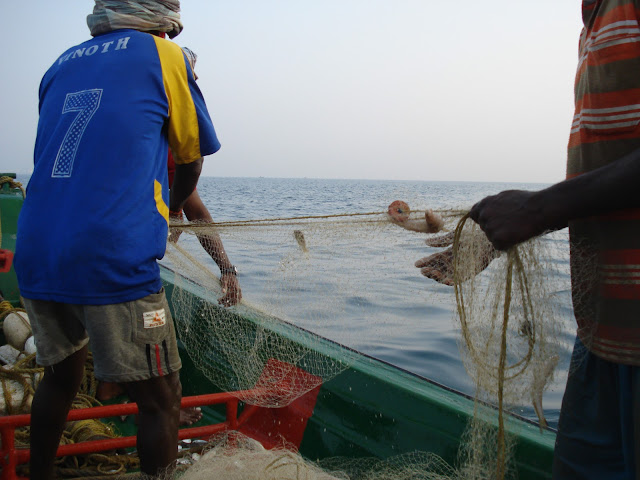 What blue container? This container: 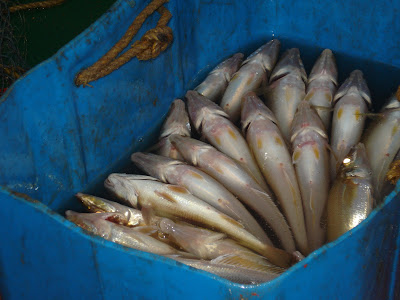 In the middle of all this, I learned the art of getting them off the net. Now, I'm not gonna put that in my resume, but it's a neat skill to have nonetheless! 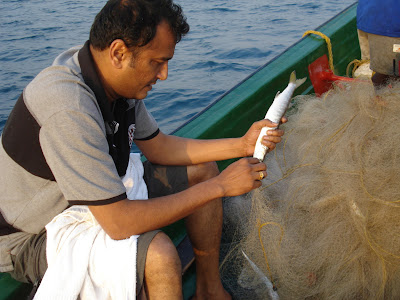 And then it happened. We caught hold of a big squid that was still alive. He (or going by the mood, She) threatened to turn everything blue. To avoid a gender bias, let's call the squid "it".  It shot off blue ink in every direction it sensed a threat. Harry tried to move it in a sensible manner by prodding it with a long spoon, and it thanked him by showering his legs with ink. 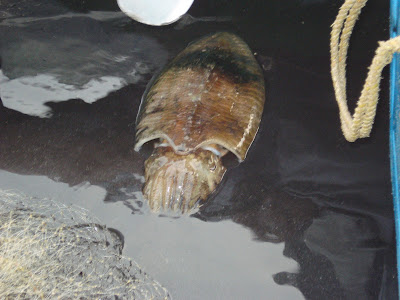 Soon it was all spent (as it was wont to be). And everybody loved it, after we cleaned it up. 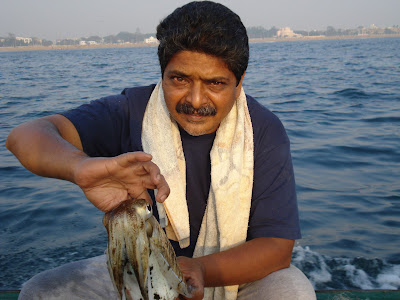 I told you everybody loved it! 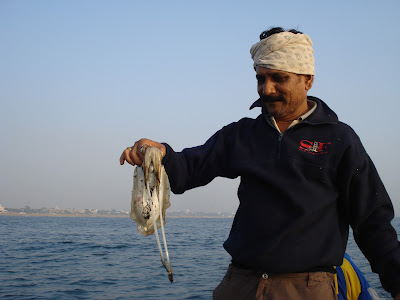 We caught them lady fishes, eels, a bunch of loner crabs, a big tiger prawn, that squid, a lot of minor nameless edible pisceans, and a few poisonous items. Toward the end of it, we were more interested in pulling the net in and making a dash for the shore. In our elaborate rituals, we had forgotten everything about the competition that prowled the same shipping grounds, who may have had already reached the markets with their catch. And our man kicked the race off. 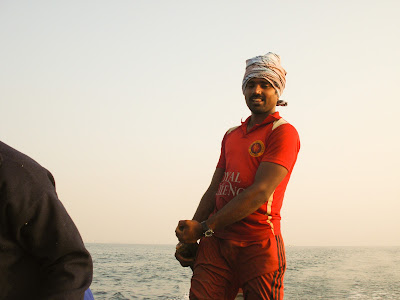 We raced to the shore (I have videos to prove it) and ended with a thud on the sandy beach. 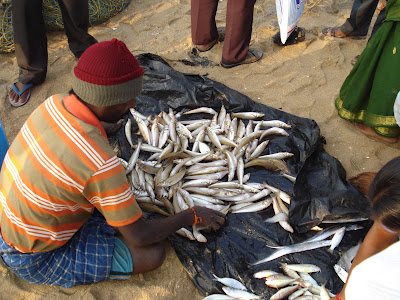 And his prospective customers. Our "miscellaneous finds and that large prawn" were sold for Rs. 150. I would have paid 150 for that big sucker of a prawn alone! 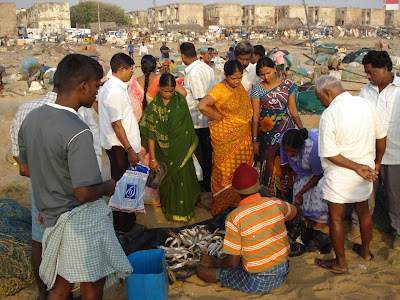 I was not happy with the catch. I kept feeling guilty that we, the fishing voyeurs, had such a good time. That said, Vinoth & Co had a better catch compared to their last outing, and they were kind of ok.

I walked around the shore comparing hauls. Surprise, surprise, everyone was selling Lady Fish!

I must have been odd figure around there, because a lot of them (strangers) kept asking me if I had a good time at sea. I mean, total strangers, asking you, how I felt on a boat. And I was like, ok, wondering how they knew.

While sipping coffee at a stall, 20 minutes later, I realized it. I was sipping hot coffee inside a shack where they sell fish. It was a privilege. The lady whose usual skill-set includes a lot of cribbing, was egging me on to finish the contents of my Styrofoam glass, fill it, and have another swig. I felt like one of them! I'm sure she felt comfortable enough to push me to refill that glass.