Means: Fish, of all types

If there's a punishment in hell for me, it's sure going to be the curse of possibly thousands of fishes that I have devoured over the last 30 odd years. Not just those purchased from the market, they seem to find me even when I'm not expecting them.

Couple of weeks back, we drove down to Kannur to visit my wife's family. After idling away most of the first day, Jithettan came up with the news of fishing nets and paraphernalia that's been set up waiting for us. Off we went to the marshlands adjoining Valapattanam river. The journey look us through some gothic terrain before we finally reached our destination - Swampland. Thorny thistles greeted us the entire way..and scratching and stumbling we reached by around 7 in the evening. It's not a perilous journey, but an icky one (if you are going there the first time and are not sure of the output). Mosquitoes swarm the place at nightfall. I was also introduced to a new life form - Anangu in local lingo - the species bites the hell out of you and it's so small to see. Guaranteed Itching.

Modus Operandi
The exercise of catching fish is elaborate. In the afternoon, during high tide, water enters these marshes. One of the gangsters plod through the muck and water and fastens a huge fishing net at the small exit. Almost all the big fishes are trapped inside, as most of the water is drained away during low tide. In the evening our folks come in, and using fishing nets, virtually pick up the fish from the small pockets of water.

We were greeted by the sight of three men with nets and assortments catching fish in the slush - Rajeev, Sri, and a new trainee (:-)) whose name I forgot. The high point of the evening was a bone chilling scream. During the escapade, a big crab had managed to get even by biting one of our crew. It took some effort to break off his (or her) leg, and thankfully not too much of a damage was done. While untying the high-tide net we also saw a poor water snake that had gotten entangled- to its death in it. I did not carry the camera the first day, and was sorry about it.
Anyway we managed to take some snaps after coming back at around 10 in the night.
This is Sree taking out the last of the Pisceans from the net. 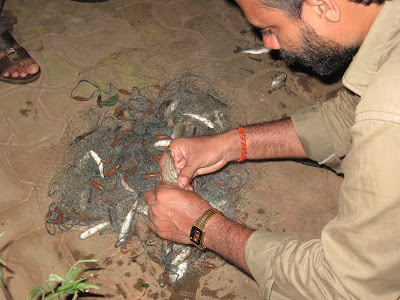 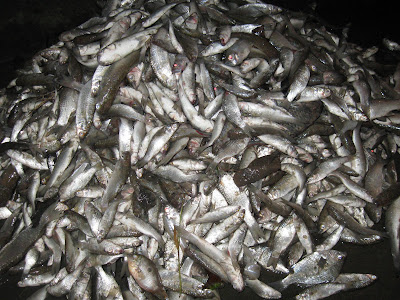 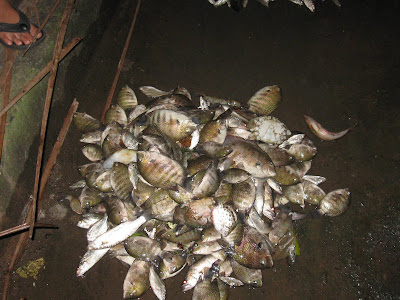 Spoils getting partitioned between the crusaders. 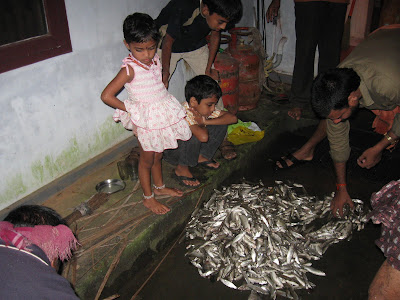 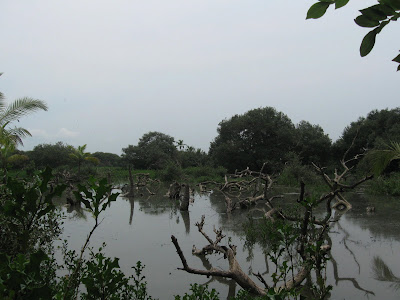